Chandigarh: Punjab politicians having pro-Indian state commitments have fumed over Canada’s New Democratic Party leader Jagmeet Singh’s reference to Punjab while supporting the ‘right to self-determination’. After being elected as the leader of the NDP, Jagmeet Singh is on Canada wide tour and he recently said that he considers self-determination to be a “basic right”.

Huffington Post also quoted him as saying on the issue of self-determination, “It is a right that is so fundamental and if people choose their future, I am completely in agreement with their decision. I, personally, would love us to stay together, but at the same time I respect the decision without fault.”

The Punjab politicians were quick to react to Jagmeet Singh’s remarks. Politicians belonging to ruling Congress and opposition Aam Aadmi Party and Shiromani Akali Dal (Badal) have issued statements to show their loyalty towards the Indian state. 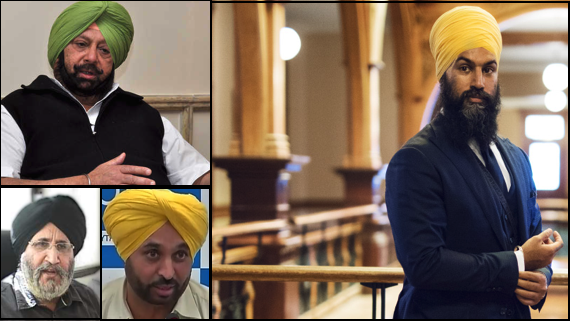 These politicians, including Punjab CM Amarinder Singh, AAP MP Bhagwant Mann and SAD (Badal) spokesperson Daljit Singh Cheema, criticised Jagmeet Singh for making a reference to the Punjab while endorsing ‘self-determination’ as a basic right. Former Chairman of India’s National Commission of Minorities and former Rajya Sabha MP Tarlochan Singh too lined up to express his belief in “unity and integrity” of India.

Punjab Chief Minister Amarinder Singh too criticised Jagmeet Singh’s remark and termed it as “anti-India conspiracy”. Notably, Amarinder Singh had himself endorsed the demand of independent Sikh state in 1994 by signing the Amritsar Declaration.

The right to self determination is internationally recognised basic political right but the politicians of Punjab, who are not more than the Subedars of the Indian state in eventually occupied territory of Punjab, are in no position to admit this fact. As their statuses depend on their loyalty towards the Indian state system, they see any statement about the use of right to self determination for Punjab as a threat to their positions.