Jammu: Whereas the attention of global Sikh community is focussed on Jammu region where the police yesterday shot dead a Sikh youth in firing, while at least three others sustained serious bullet injuries; the state government has, on the other hand, decided to impose “information blackout” in the region.

District magistrate of Jammu has ordered the telecom companies to ban internet access on mobile and landline networks with immediate effect. This will lead to total breakdown of all internet services in Jammu including email, websites, social media – including Facebook, Twitter and Whatsapp etc.

Directions issued by Simrandeep Singh, IAS, District Magistrate of Jammu to telecom networks namely Airtel, Aircel, BSNL, Vodafone and Idea, reads: “In view of the tense situation in Jammu district on account of law and order disturbances, you are required to immediately stop internet services provided by you, both on landline and mobile networks. This shall remain in effect till further orders are given by this office”.

“This letter is being issued to prevent any disturbances of peace and public order in Jammu district. This direction of undersigned be considered as issued under section 144 CrPC, the violations of which will invite penal action under section 188 of Ranbir Penal Code” the District Magistrate’s order reads further.

Sources told SSN that internet services were working in Jammu at around 11 am but it could stop working any time in wake of ban orders by the government. 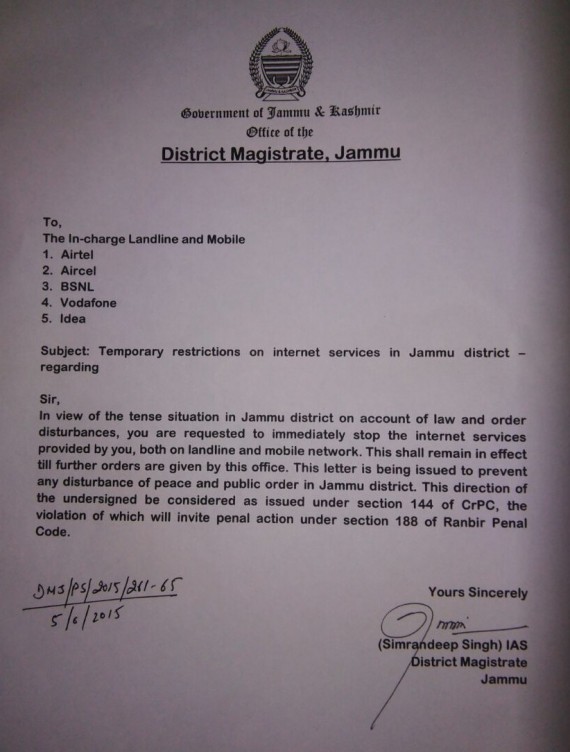