Chandigarh/ Mohali: In a move that could be considered as an initial setback for the Punjab government and Punjab police in case against Sikhs For Justice (SFJ) activists a Mohali court yesterday denied police remand of Gurpreet Singh who was framed by the police in this case. Gurpreet Singh was booked under ‘sedition’ charges by the Punjab police along with other SFJ activists for propagating ‘Referendum 2020’, an event declared by the SFJ.

The police had produced Gurpreet Singh before the court of Judicial magistrate (1st class) Harpreet Singh and demanded five days police remand. The remand plea was strongly opposed by defence councils Tejinder Singh Soodan and Gagan Agarwal who informed the court that Gurpreet Singh was already picked up by the police on 4 July and he was kept in illegal custody by CIA Staff Kharar, while the case (FIR No. 149 u/s 124A, 153A, 153B and 120B) was registered on 6 July. 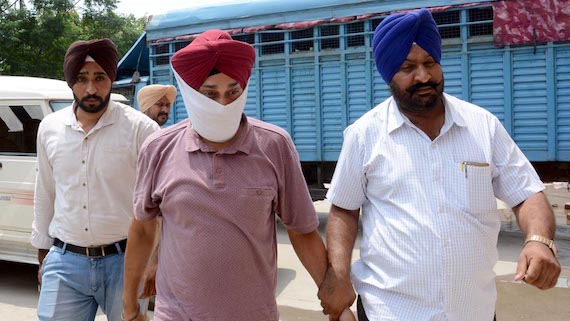 The prosecution and Punjab police investigating officer pleaded that the police were to arrest Harpreet Singh of Jammu on the identification of Gurpreet Singh. But the defence pleaded that Gurpreet Singh was a printer of advertisement materials and he used to receive orders for printing flexes via email and he does not recognise Harpreet Singh. Moreover, the defence lawyers told the court that propagating any political agenda, including the Khalistan, does not amount to any offence. They produced the copies of judgements of higher court before the magistrate to support their point.

After hearing arguments of both sides, the magistrate refused to grant any remand of Gurpeet Singh and he was committed to judicial custody and was sent to jail.

With Inputs of Major Singh from Mohali.