Jalandhar:  The pro-freedom group of the Sikhs here today while citing the remarks of former Indian  Vice-President Hamid Ansari that minorities in India were feeling insecure, the Dal Khalsa said the threat to minorities was real but irony is that the people who matter were speaking truth too little and too late. 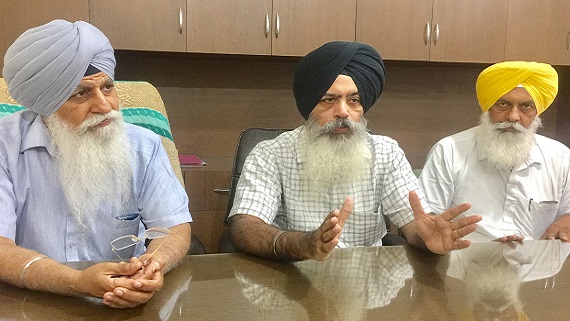 Party leaders H S Dhami and Kanwar Pal Singh said “minorities and Dalits in India were insecure as the ruling class has turned intolerant. He cited numerous incidents of curbs on freedom of expression, misuse of sedition laws across the board, lynching of human beings in the name of ‘cow protection’ and denial of fundamental rights including right to hold independent belief to drive his point home”.

Furthermore, they added that it’s unfortunate that most of the time people at top posts hesitate to call a spade a spade while in office and keep mum till the day they were to retire. He wondered why Hamid Ansari didn’t raise his concern during his tenure and added he should have practically reprimanded those who were playing divisive politics and brutalizing the polity of the country.

“The way Hindutva brigade both from the inside and outside the govt were attacking Hamid Ansari proves that what he said is true,” both added to their statement.

The leaders announced that they would take up all these issues in the proposed Conference to be held on August 14 at Gurdwara Guru Nanak Mission, Jalandhar. They said after the conference their group will hold a protest march in the city with the “the aim to show their resolve and desire for Azaadi from India.  The leaders of pro-freedom group gave a call for boycott of I-day celebrations as there was no reason for Sikhs to celebrate Aug 15“.

They said the rulers of the country were worried about the protection of cow, but ironically they treat human beings especially Dalits and minorities in an inhumane way.

Stating that Sikhs were not alone who desire to be masters of their own destiny, they said the Kashmir and Punjab problem both were cases of the broken promises. Indian leadership has betrayed and ditched both the nationalities.