Installing Portraits Is Aimed To Pay Respect & Give Recognition To Martyrs Of Faith, Says Dal Khalsa

Amritsar: The pro-freedom Sikh group Dal Khalsa here today appreciated the decision of the SGPC to install portraits of June 1984 martyrs in the basement of memorial built within Darbar Sahib in memory of those who died during army attack in 1984. 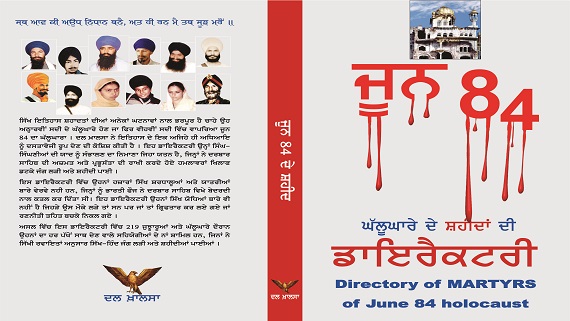 While addressing the mediapersons the Party spokesperson Kanwar Pal Singh said ”it was long due and the credit goes to Prof Kirpal Singh Baduangar who took initiative to fulfil long desire of the Panth. Ever since the memorial was constructed in 2012, the SGPC was hesitating to go ahead on the issue.” However, with the change of guard at Teja Singh Samundhari Hall (Amritsar), the new incumbent has finally decided to honour Sikh sentiments. He said to pay respect and give due recognition to the Martyrs of faith the installation of their portraits at memorial site was of utmost importance.

He reminded that after some research work done way back in 2006 and published a Martyr’s directory compiling names and photographs of around 220 Sikh warriors and their sympathizers who laid down their lives while defending the sanctity of Darbar Sahib. He said the copy of the directory has been handed over to the SGPC.