Chandigarh: Intense pain and sufferings endured by Sikhs, Hindus, and Muslims during 1947 Partition still haunts their second-third generation of Punjabis as the communities’ representatives assembled here today to observe the Independence Day as ‘Punjab’s Devastation Day’.

First, the assemblage performed ‘ardas’ (prayer) at Gurudwara at Kendri Sri Guru Singh Sabha complex as part of ‘soul searching’ pledge and to pay tributes to those killed during the Partition mayhem. Later, they appealed to the Punjabis to have a relook on the political developments particularly those took place between 1940 and 1947 and re-analyse them to demolish the ‘nationalistic narratives’ built on both sides of the Redcliff line to gloss over killings of 10 lakh innocents and two-way migration of 82 lakh Punjabis besides rape and abductions of their 3-4 lakh women. 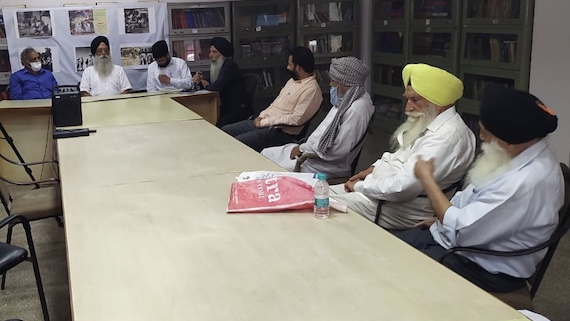 The participants said the Partition plan was cooked by ‘powerful political players’ in Delhi who blatantly used the religions to implement their political designs of creating their separate ‘nation-states’, projected to have born out of the Indian sub-continent on August-14-15 (1947). Dalits on both sides of the border were rendered unpeople and faceless human beings.

Unfortunately, the Punjabi political players had played second fiddle to ‘Delhi-Bombay based bigger bosses’ never to exercise their own wisdom and foresight. Rather, Lahore based politicians became instrumental in the devastation of Punjab. Present Indian Punjab, a progeny of the fifth division of Maharaja Ranjit Singh’s Punjab stretching from Kabul to Delhi has been reduced to a non-entity in Indian political structure.

Now, the Punjabis on Indian side have to ponder how to acquire their due space in power net-work and protect its rich language, traditions, and culture from being obliterated by the powerful.

The Sikhs also need to go in for deep soul-searching how come they allowed themselves to be used as ‘pawns’ in the political game and blind blood spilling spree when the Sikhism –a non-exclusivist religion and the Sikh Gurus forbid the followers even from lifting the hand holding sword on the innocent and non-combatants. The Sikhs are also forbidden to treat other religions as “inimical ones”. We should remember that only by following the Sikhs’ principles, moral scruples, and lofty values the Sikh Panth have performed great deeds world over.