Since August 9, the international wing of the Rashtriya Swayamsevak Sangh has hosted events in at least 17 government offices throughout the US, including those of two congressmen and nine law enforcement departments, in a coordinated campaign which a US-based human rights group warns is “an attempt to legitimize a fascist paramilitary responsible for pogroms against minorities in India.” 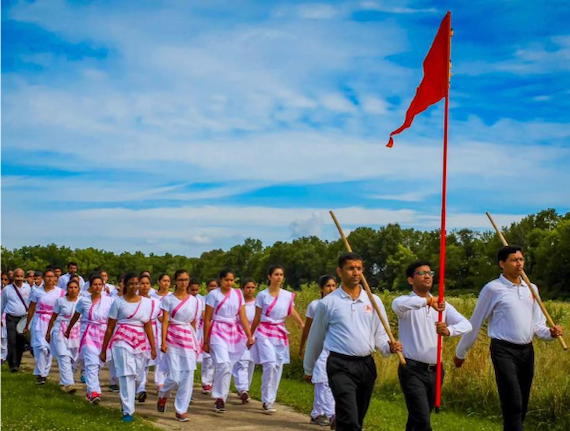 “Under the guise of celebrating Raksha Bandhan, a traditional Hindu ceremony, the Hindu Swayamsevak Sangh infiltrated multiple government offices, including many police departments,” says Arvin Valmuci of Organization for Minorities of India. “Leaving aside the question of whether or not these government agencies should officially participate in a religious ceremony, they should absolutely have nothing to do with the HSS, which is the international wing of the RSS. This is an attempt by the HSS to legitimize a fascist paramilitary responsible for pogroms against minorities in India.” 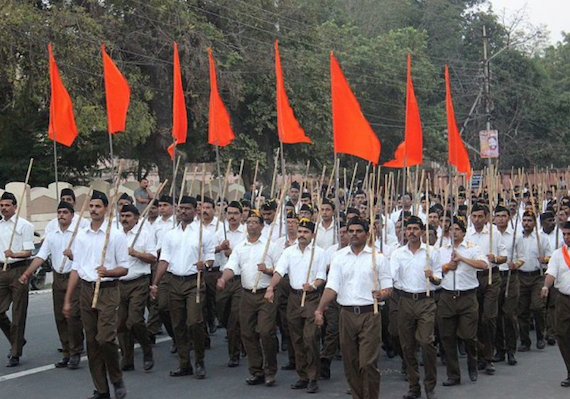 In Texas, Fort Bend County Commissioner Andy Meyers faced outcry on Facebook after sharing pictures of his participation. He subsequently revised his post to note that he was approached by a charter school requesting that he meet with local students, implying that he was not informed that the event would be hosted by the HSS. He has since deleted the post entirely.

“The HSS is the international wing of the RSS, a violent and supremacist paramilitary in India whose founders praised Nazi racial policy and modeled themselves along the same lines as the Hitler Youth,” wrote Haziq Jeelani on the Facebook of New Jersey’s Woodbridge Township Mayor John McCormac. “They display pictures of these founders at most of their gatherings. They are a fascist organization not a religious group…. They are trying to normalize themselves and lend credibility to themselves by such photo ops. Please refrain from associating with them.”

“Hi, actual person with ties to Coppell here,” wrote Sai Chimata on the Facebook of Texas’s Coppell Police Department. “Why the hell did y’all take these people seriously? Next time, do your research! The HSS is a foreign offshoot of the RSS, a militant Hindu nationalist organization in India, a literal paramilitary that’s been involved in some of India’s worst riots and pogroms. HSS-USA is essentially engaged in whitewashing Hindu nationalism abroad and promoting it among the diaspora.”

On the Facebook of Illinois’s Naperville Police Department, Khalid Azam wrote, “What a disgrace!” Azam, a founding member of Indian American Muslim Council, continued, “This is a fascist organization (fascist is not being used as a slur here) — HSS and its parent org, RSS, was founded by Moonje and others who visited Mussolini and Hitler and sought advice on how a similar organization and movement rooted in Fascism can be created in India. These founders have statements on the record defending fascism and Hitler’s treatment of Jews.”

“Seems RSS Hindutva Fascists, who are killing innocent Christians and other minorities, wanting a all Hindu state, are preparing groundwork in the US,” wrote Ranjit Singh on the Facebook of California’s San Ramon Police Department. “It seems they have vested very heavily into pulling this off in all police stations in the US. Wow, watch out!”

“Clearly, the Howard County Police Department is not aware that the HSS is the international wing of the RSS,” wrote Miriam Joseph on the Facebook of the Maryland law enforcement agency. “They are extremist Hindu supremacists who regularly lynch and kill Christians and Muslims in India. It was one of their members who shot and killed Mahatma Gandhi.”

In the 21st century, the RSS is most notorious for staging two major pogroms against Indian minorities.

In 2008, around 100 Christians were massacred in the Indian state of Odisha. Their churches and homes were burned and tens of thousands were made refugees. Odishan Chief Minister Naveen Patnaik, who was in office during the pogrom, reported, “Members of RSS… were involved in the violence.”

In 2002, around 2,000 Muslims were massacred in the Indian state of Gujarat. Reporting on the violence, Human Rights Watch stated, “The groups most directly responsible for violence against Muslims in Gujarat include the Vishwa Hindu Parishad, the Bajrang Dal, the ruling BJP, and the umbrella organization Rashtriya Swayamsevak Sangh (National Volunteer Corps, RSS), all of whom collectively form the Sangh Parivar (or ‘family’ of Hindu nationalist groups). These organizations, although different in many respects, have all promoted the argument that because Hindus constitute the majority of Indians, India should be a Hindu state.”

HRW’s report was entitled “We Have No Orders To Save You,” which is what several witnesses reported the police told them when they appealed for rescue from their attackers. Graffiti discovered on torched Muslim institutions declared, “The police are with us.” After the violence ended, many testified that police refused to file charges on behalf of the victims or record the names of the accused.

Award-winning Indian author Arundhati Roy explains that, in the years before the pogrom in Gujarat, “the police, the administration, and the political cadres at every level” were “systematically penetrated.” Roy states, “The RSS runs a shadow government that functions through tens of thousands of shakhas (branches) and other ideologically affiliated organizations with different names — some of them astonishingly violent — spread across the country…. The RSS today has white supremacists and racists from the United States and Europe circling around it.”

“We appreciate the open welcome government agencies in America provide to people of all religions, races, and backgrounds,” comments OFMI’s Valmuci. “Yet the RSS is, by its very nature, opposed to diversity and multiculturalism. The presence of the RSS’s international wing in American police departments frightens minorities of Indian origin and inculcates a feeling of deep insecurity. We want these government agencies to apologize for hosting the HSS, to issue statements distancing themselves, and to disavow all future events with this international wing of a supremacist paramilitary.”