New Delhi: Given the atmosphere in India, “intolerance” is an inadequate word to describe the “fears” under which minorities are living, author Arundhati Roy said in Pune on Saturday.

“Killing people, burning them alive and the other goings… ‘intolerance’ is not sufficient. We have to coin a new word to describe all this,” Ms Roy said.

She also charged the BJP-led central government with promoting ‘Brahminism’ under the guise of ‘Hindu Rashtravad’ and attempting to glorify social reformers of India as ‘great Hindus’ though some like B.R. Ambedkar had left Hinduism.

“Not only this, the government is trying to rewrite history, they are nominating their own people in various national organisations and institutions, and dividing Dalits, Muslims, Christians and tribals,” Ms Roy said. 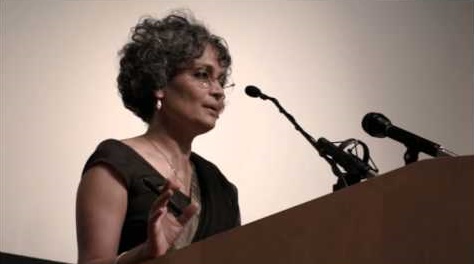 The 55-year-old Booker Prize winner’s comments came at a function where she was presented with the Mahatma Jyotiba Phule Award by the Mahatma Phule Samata Parishad (MPSP).

AVBP activists raised slogans calling her “anti-national”, “anti-Indian Army” and “pro-Pakistani” before they were detained and taken away.

Later, in a memorandum submitted to the MPSP, the ABVP said Roy’s anti-national stance had hurt the sentiments of all Indians.

Two weeks ago, Roy faced flak from several quarters after she returned her 1989 National Award for Best Screenplay for the film “In Which Annie Gives It Those Ones” to join artistes-writers to protest what they termed growing “intolerance” in the country.