San Francisco, CA: As per a press release by the Sikhs For Justice (SFJ), Capt. Amarinder Singh was served with summons of a Canadian court in a defamation law suit.

While Capt. Amarinder was addressing an NRI gathering in Bay area California, “Sikhs For Justice” (SFJ) served him with notice of intended “defamation law suit” under Canadian laws for accusing the human rights group of playing into the hands of Pakistan’s intelligence agency ISI. 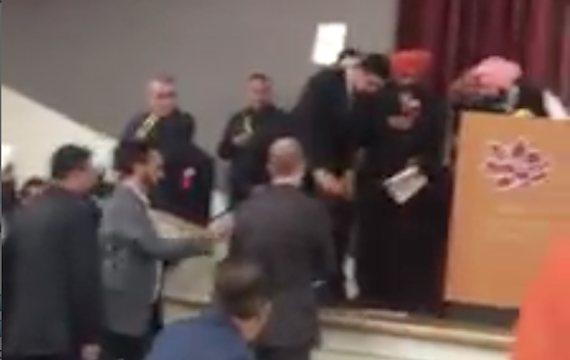 The demand letter accompanying the notice by SFJ’s Toronto based law firm Goldblatt Partners states that “the purpose of this letter is to give you the opportunity to provide a prompt, unequivocal, full and fair retraction and apology” within seven from the service.

May 02 “Notice of Libel” informs Punjab Congress Chief to “Take Notice that intended Plaintiff, Sikhs for Justice, will commence proceedings against you, the Intended Defendant, Amarinder Singh, for defamatory statements you made on or about April 24, 25 and 26, 2016 (the “Defamatory Statements).

Citing the newspapers which published the defamatory statements notice of the intended defamation law suit before Ontario Superior Court of Justice states that the “the publication of the Defamatory Statements has caused grave damage and injury to Sikhs for Justice, a Canadian non-profit organization incorporated and operating pursuant to the Laws of Canada”.

ISI-SFJ nexus controversy started when responding to the Sikh advocacy group’s “Torture” case in Canada, Capt. Amarinder on April 23 stated, that “SFJ is playing into the hands of the anti-India forces like the ISI to embarrass India and project as if rights violations was the norm of the day in the country (India) like some dictatorships in different parts of the world”.

Captain Amarinder could not be reached for comments.