Shimla: The state unit of the Bhartiya Janata Party (BJP) on Sunday, named its former chief and MLA from Seraj constituency, Jai Ram Thakur as next Chief Minister of the Himachal Pradesh. He will be first politician from Mandi to hold top office in the state government.

BJP had won a record nine of the 10 seats in Mandi district in the just-concluded Assembly elections. 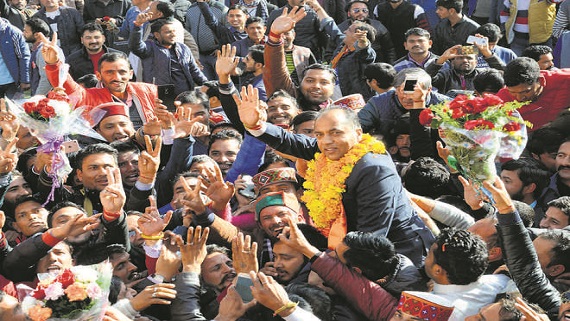 Jai Ram Thakur with his supporters after being chosen as BJP Legislature Party leader in Shimla. PTI

It is stated that Jai Ram Thakur’s name was first suggested by former CM P K Dhumal and seconded by JP Nadda and Shanta Kumar. Immediately after the announcement, Anurag Thakur and Satpal Singh Satti and the two BJP observers met Governor Acharya Dev Vrat to stake claim to form the next government. Thakur will be sworn in  on December 27 in the presence of PM Narendra Modi and party chief Amit Shah, reports The Tribune (TT).

Surprisingly, Jai Ram Thakur has a very strong link with the ‘Pro-Hindutva’ fountain head Rashtriya Swayamsewak Sangh (RSS). In the past too he had been an active member of the ABVP, student wing of the BJP. Making him an ideal choice for the CM’s office by a pro-hindutva leaning party.