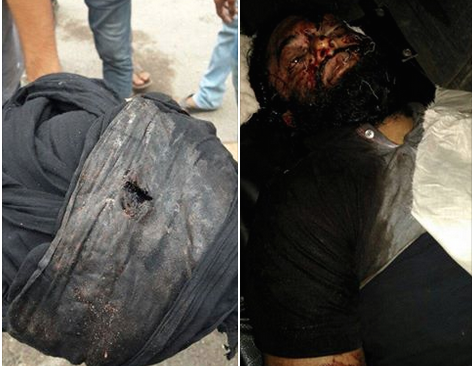 Sources said that Bhai Jagjeet Singh was hit in head by a bullet fired by Jammu police and he is supposed to have died on the spot.

Police say that the fire was opened in wake of stone-pleting by Sikh protesters.

After the incident the administration imposed curfew was imposed in Ranibagh area of Jammu.

One of the organisers of 6 June Shaheedi Samagam in Jammu told Sikh Siyasat News (SSN) over phone that after yesterday’s incident the police had agreed to suspend SHO Kulvir Chaudhary who had removed hoarding of Ghallughara Samagam. The Shaheedi Samagam was to held at Ward Number 1 of Simbal Camp, Jammu on 6 June. This program is organized annually by Jammu’s Sikh sangat and Sikh Naujawan Sabha, Simbal Camp, Jammu.

Sources told Sikh Siyasat News (SSN) that some activists of Shiv Sena had started raising objections to the Shaheedi Samagam earlier this week.

Sources told SSN that a police party led by Satwari SHO Kulvir Choudhary backed Shiv Sena activists in removing posters of Shaheedi Samagam. SHO Kulvir Choudhary himself removed hoarding of the Samagam on June 3. SHO was reportedly thrashed by angry Sikh youth along with another SI.

To protest against removal of Shaheedi Samagam hoardings by police Sikh Sangat staged a massive protest. The administration admitted SHO’s mistake and senior police and civil officers including ilaqa SP, SDM and Deputy Commissioner (DC), assured Sikhs that the administration won’t remove any posters of Shaheedi Samagam or Sant Jarnail Singh Bhindranwale, after which Sikhs had lifted up their dharna.

Police said the issue was settled, but removed posters during night:

The police had assured the Sikh community of Jammu last night that the matter was settled and no one would prevent us from holding the Shaheedi Samagam.

But the police removed all posters on intervening night of 3 and 4 June. In the morning around ten to twenty policemen were found guarding the spots from where posters were removed.

The police reportedly started rounding up Sikh youth from Rani Bagh area this morning (on June 04).

When Sikhs came to know about police action youth began to gather to protest against the police action. The police resorted to firing, in which Bhai Jagjeet Singh was got killed and around five others sustained injuries.

The administration has clamped indefinite curfew in Ranibagh area of Jammu.

At the time of writing this report, a meeting of Sikh sangat was underway in Jammu. Sources said that Sikh youth were determined to hold 6 June Shaheedi samgam.