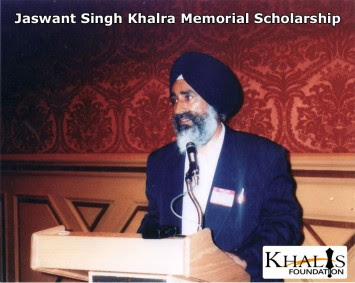 United States: The Khalis Foundation has launched Jaswant Singh Khalra Memorial Scholarship. The scholarship was founded in the memory of the Sikh martyrs who gave their lives for freedom from the 1970’s to the 1990’s. The first scholarship prize is currently for $1000 US and will be awarded to an essay writer anywhere in the world who is currently a student, 16 years old or over.

The essay topics are related to current panthik developments and the state of the Sikh nation worldwide. Applicants must also provide a brief biography on how they became inspired to practice Sikhi.

A statement by the Khalis Foundation says: [i]n the latter part of the 20th century, the Indian Government brutally murdered and tortured hundreds of thousands of innocent Sikhs in a mass campaign to wipe them out. Many Sikhs fought against this oppression and spoke out against being treated as second class citizens—their protests were answered with torture and genocide. Jaswant Singh Khalra was one such man who was killed by government officials for documenting human rights abuses.