San Francisco, California: California Sikh community commemorated the martyrdom of Guru Arjan the fifth Sikh Guru and the 33rd anniversary of the Indian government’s attack on Darbar Sahib in Amritsar in 1984. 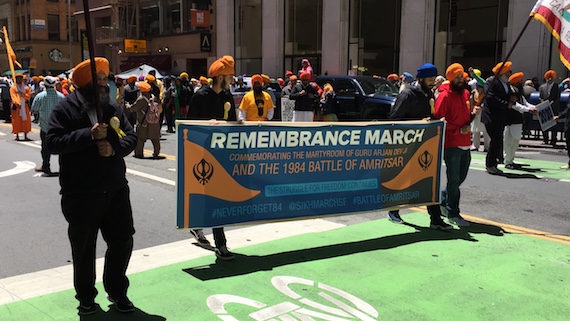 A view of the march

More than 10,000 Sikhs from the Bay Area, Sacramento, and Central Valley attended the event. The parade highlighted the fact that even after 33 years the issued concerning the Sikhs remain unaddressed. Minorities in India continue to be persecuted and the victims of the Sikh genocide that occurred throughout India in November 1984 are still waiting for justice. 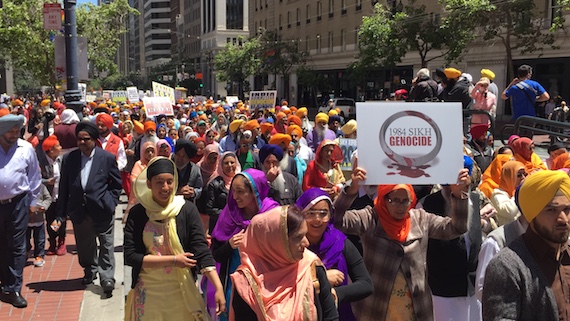 The event organizer Jasdev Singh says,”we come here every year to commemorate our brothers and sisters who sacrificed their lives for the defense of the Darbar Sahib. We should not forget them and we will not forget them”. “A separate Sikh state is the only solution to the safeguard of Sikhs”, he said.

He further said that on 16 June 1606, the then ruler of India, Mughal Emperor Jahangir, ordered that Guru Arjan Dev, the fifth Sikh Guru to be tortured and sentenced to death after the Guru had refused to stop preaching his message of God as started by Guru Nanak. That there are one God and all creation is equal and must be treated as such. With Dignity, Justice. 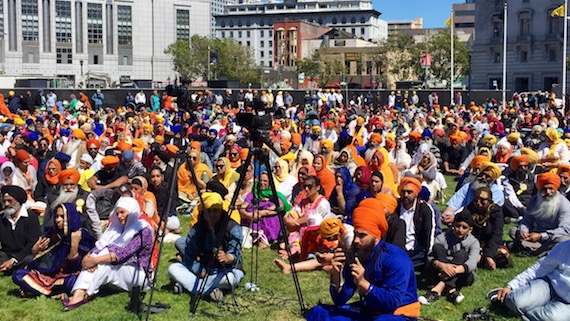 “The Guru was made to sit on a burning hot sheet while (technically you can’t say boiling sand I would just say hot sand) boiling hot sand was poured over his body. After enduring five days of unrelenting torture, Guru Arjan Dev was taken for a bath in the river. As thousands watched, he entered the river, never to be seen again”, he added.

“In his lifetime, Guru Arjan accomplished two towering achievements: He successfully completed the stupendous task of compiling the Guru Granth, which is treated as the universal scripture of humanity. It not only includes the hymns of the six Sikh Gurus but also the hymns of more than twenty Hindu and Muslim saints. The Guru Granth was formally installed at the Darbar Sahib Amritsar during the annual gathering of the Sikhs. The Guru was responsible for initiating and the construction of Darbar Sahib”.

Jasdev Singh further said that the Sikh genocide code named Operation Blue Star has been listed in India’s Top 10 Political Disgraces by the country’s leading news journal, India Today. According to Joyce J. M. Pettigrew: “The army went into Darbar Sahib (Golden Temple) not to eliminate a political figure or a political movement but to suppress the culture of a people, to attack their heart, to strike a blow to their spirit and self-confidence”.

“Newspaper article of the time stated that the operation involved six Army infantry battalions and a detachment of commandos. The operation was carried out by the Indian Army troops equipped with tanks, armored vehicles, and helicopter gunships”.

“The massacre occurred from June 3-6, 1984 when the Indian Army attacked the Darbar Sahib complex in Amritsar. In addition to Darbar Sahib the main sanctum, the Army simultaneously attacked 43 other Gurdwaras across the Punjab. The Sikhs fought under the command of Sant Jarnail Singh Bhindranwale for full three days against Indian Army and this fight knows as ‘The Battle of Amritsar’ too”.

“The attack aroused immense controversy, and the government’s justification for the rationale, timing, and style of the attack continue to be debated today. No inquiry was ever ordered and no one was held accountable. The political ramifications of the army attack become readily apparent when one realizes that the action was planned by Prime Minister Indira Gandhi far in advanced for the occurrence”.