Chandigarh: Punjab Chief Minister Amarinder Singh has asked the Central Government to cut down on the 30-day notice period for pilgrims to apply online for visiting the historic Sri Kartarpur Sahib Gurdwara during the 550th Prakash Gurpurb celebrations.

He was chairing a high-level review meeting to assess the progress of the Corridor project with a team of officers from the Centre. 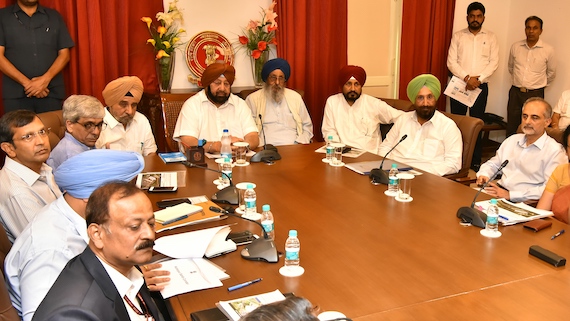 A view of the review meeting held in Chandigarh on October 1, 2019

A release by CMO states that Amarinder Singh also asked the central team to examine the feasibility of issuing e-permits to Sikh devotees and setting up a dedicated Passport Sewa Kendra at Dera Baba Nanak to facilitate the lakhs of pilgrims expected to apply for Kartarpur Sahib Darshan. Such a Kendra would facilitate the lakhs of devotees likely to come from far-flung and rural areas, he said, while reiterating his request to the Centre to ask Pakistan to remove the US $20 visiting fee on the pilgrims.

Meanwhile, the Chief Minister asked the RPO Chandigarh to ensure a fast-track and accessible mechanism to deliver passport services to pilgrims on top priority. He also asked the department to immediately start organising passport camps across the state to help the devotees in filing online.

To further facilitate the pilgrims, the Chief Minister asked the Centre to allow a minimum of Rs. 10,000 in Indian currency per person. The Centre should ensure that enough money exchange booths are set up by Pakistan at the site.

Reviewing the construction of bridge over Budhi Raavi Channel and the four-lane highway, as well as the design of Darshan Sthal, the Chief Minister asked the Central team to get these executed at the earliest. On the state-of-the-art Passenger Terminal Building being constructed at a cost of Rs. 177.50 Crores, the Chief Minister was apprised that the central team was closely monitoring its progress and the project was likely to be completed by October 31, 2019.

The Chief Minister also reviewed the progress of the dedicated service road being temporarily constructed to connect with the international boundary during the current year. The project would be completed by October 15, 2019, the meeting was informed.

The releases states that Amrinder Singh further urged the Central team to ensure that the Civil Aviation department and Railways complete the facelift of the Amritsar airport and the city railway station, respectively, at the earliest.

Responding to Captain Amarinder Singh’s query on the number of pilgrims to be allowed daily, Joint Secretary, Ministry of Home Affairs, SCL Das disclosed that the Central team had raised the issue with their Pakistan counterparts. Pakistan was so far willing to allow maximum of 5000 devotees daily, with the limit to be increased to 10,000 and more on special days.

Earlier, in his presentation, Commissioner, Bureau of Investigation, GoI, Rajeev Ranjan Verma said the online portal for pilgrims to apply for the visit would be launched soon, both in Gurmukhi and English. The meeting was also informed that the Government of India had sanctioned Rs. 15,78,09,000/- for erecting robust policing and security infrastructure at Dera Baba Nanak. The infrastructure would include a Police Station Type ‘H’ building, office space for police, beside dormitory accommodation for 150 police personnel, in addition to 50 Residential Flats.