Hoshiarpur: Expressing their gratitude to the government of Pakistan and India for making the Kartarpur Corridor a reality, the Dal Khalsa said at inauguration ceremonies on both sides of Radcliffe, Gaini Harpreet Singh was at his best and Captain Amarinder Singh was at his worst. 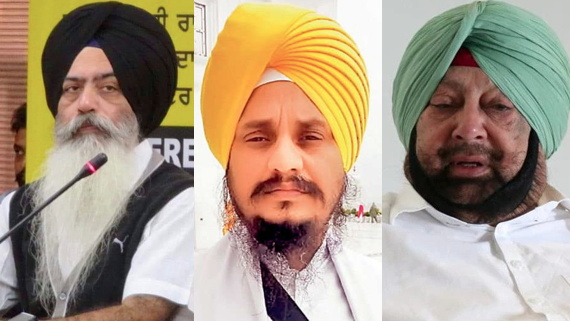 “Even though ours group don’t recognize Gaini Harpreet Singh as Jathedar of Akal Takhat, we feel he represented collective aspirations of the Sikh Nation during his speech”, said Kanwar Pal Singh.

He said without naming political parties including SAD (Badal), Gaini Harpreet Singh has sternly snubbed all those who were ridiculing Pakistan for charging $20 fee as service charges. Contrary to Akali Dal’s stance on Kashmir lockdown, the SGPC appointed Jathedar strongly condemned state atrocities and barbarism on Kashmiris by Indian forces.

His narration of ideological similarities between Sikhism and Islam would further enhance brotherhood and harmony among Sikhs and Muslims of this region.

Slamming Punjab CM for his nonsense and revengeful talks, he said Amarinder’s foul language has shamed the entire Sikh community. “He spoke as war monger from the platform of corridor, which is widely seen as symbol of peace and harmony”.

He said Pakistan PM Imran Khan has once again showed statesmanship and welcomed Sikh Diaspora with open heart. He has won the hearts of Sikhs with his sobriety and gestures, observes Dal Khalsa leader.

Fortunately for the first time, Navjot Singh Sidhu spoke on behalf of Sikh Nation (Quam). Navjot Sidhu was his best when he said though Sikhs are one percent of population but their influence (dabdaba) is equal to 50 percent, said Kanwar Pal Singh.