Chandigarh: In a major development in Punjab’s political landscape following the unconditional apology addressed to former minister Bikaram Majithia by Aam Adami Party (AAP) Convener Arvind Kejriwal, both the Punjab unit of AAP and Lok Insaaf Party (LIP) has called of their political alliance in the state. 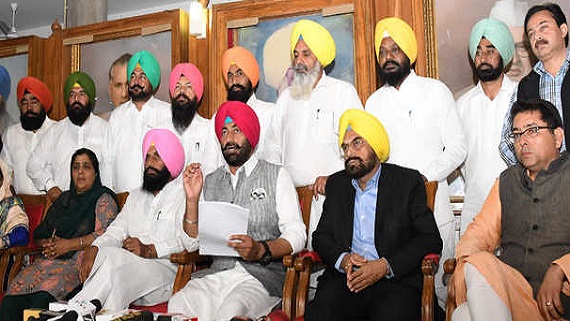 Leader of Opposition Sukhpal Khaira and other AAP MLAs in Chandigarh on Friday. Tribune photo

Before splitting up the leader of opposition in the state assembly Sukhpal Singh Khaira along with LIP leaders  released a ‘chargesheet’ against Amarinder Singh lead Congress government.

While addressing the media persons during a press conference he stated that “atleast 374 farmers and farm labourers had committed suicide since the Capt Amarinder Singh government took over a year ago.” This fact belies the Congress’ pre-poll promise of writing off debt of all affected farmers, he adds.

The government has waived only 0.33 per cent (Rs 332.16 crore) of the debt of Rs 1 lakh crore, Sukhpal Singh Khaira reportedly said.

On drug menace, the situation was the same as during the SAD (Badal)-BJP rule despite Amarinder’s promise of eradicating it within four weeks of assuming power, he further added to his statement.

He said the government, in order to hoodwink the youth, was organising “job fairs” which were a mere reflection of respective campus placements of the colleges.  Families of Amarinder Singh and former CM Parkash Singh Badal were playing a friendly match as the CM was not initiating action against the latter over ill-gotten wealth, reads the statement of Sukhpal Singh Khaira published in an English vernacular.

Shortly after breaking the alliance with the Aam Aadmi Party, LIP chief and local MLA Simarjit Singh Bains reportedly said former minister Bikram Majithia should be arrested on the basis of evidence submitted by the Special Task Force (STF).

“Arvind Kejriwal has deceived Punjabis by tendering an apology to Majithia. Chief Minister Capt Amarinder Singh should order Majithia’s arrest at the earliest,” reads his statement in The Tribune (TT).