Anandpur Shaib: Pro-Khalistan slogans were reportedly raised at Anandpur Sahib in the presence of top leadership of Bhartiya Janta Party (BJP) and Shiromani Akali Dal (Badal) during a function organised by the state government to mark 350th foundation day of Anandpur Sahib.

As per information as soon as the Indian Home minister and senior BJP leader started his speech around forty three members of Shiromani Akali Dal (Mann) raised “Khalistan Zindabad” slogans and opposed the Rajnath Singh accusing BJP for being a fascist party. Sources said that Rajnath Singh had to stop his speech for a while. The police and other security personnel were quick to round up and take away activists of SAD (Mann) who were raising the slogans.

Arrested activists of SAD (Mann) were reportedly lodged at Anandpur Sahib police station. Sources said that the police was yet to decide about their detention and no case was filed till evening.

During his address Rajnath Singh appealed to the youth of Punjab to take a pledge against the drug menace. 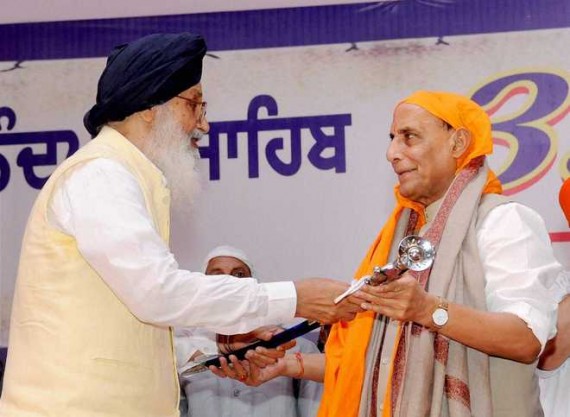 Prime Minister Narendra Modi, who was also invited, could not visit the event as he had a meeting with visiting Tanzanian President.

Addressing the gathering, Rajnath Singh said, “I know the Punjab government is taking steps and trying its best to prevent it (the drug menace), but whenever I get this news, be it Punjab or neighbouring states, that youths are into drugs…I want the youths of Punjab to take a pledge on this historic day today that they will fight against drug menace wherever it exists.”

He said while the SAD-BJP government was taking steps to fight the scourge, to completely root out the drug menace, it also needs whole-hearted cooperation from the public.