Sikh Youth of Punjab (SYP) the youth wing of Dal Khalsa  took out a march in the city holding placards of Sant Bhindrawale describing him the real warrior. The protesters denounced the writings of Kuldeep Nayyar and sought unconditional apology from him. 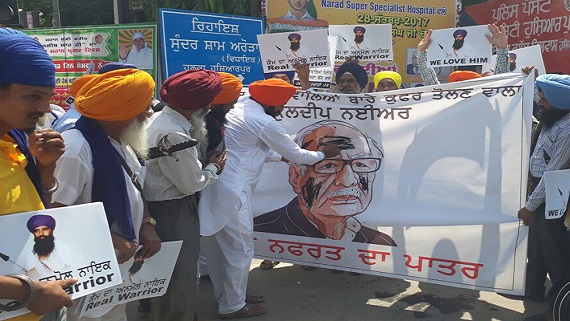 President of the youth wing Paramjit Singh Tanda blackened the picture of Kuldeep Nayyar to express their anger. “Nayyar has misused his pen to defame and degrade our hero (read Sant Bhindrawale). We have used black ink to blacken his face on poster to express our resentment”, said he while addressing the demonstrators.

Furthermore, he said the Sikhs were perturbed the way he has drawn comparison between debauch and degenerated person like Gurmeet Ram Rahim and the dedicated warrior of high character like Sant Bhindrawale. “Kuldeep Nayyar has crossed all limits. He must tender apology to Sikh Panth. Otherwise we won’t allow him to address any public gathering or function in Punjab”.

Subsequently, they also castigated the traditional Akali leadership for keeping mum. Those who claim to have enjoyed the warmth of Sant Bhindrawale are presently enjoying high positions in Badal Dal and the SGPC. But ironically, their lips are sealed courtesy Badals closeness with Kuldeep Nayyar.  Dal Khalsa activist Nobeljit Singh said Nayar keeps on spitting venom against Sikh heroes from time to time and added that he needs to be tamed.

Shiromani Akali Dal (Amritsar)  activist Gurnam Singh said, it’s not the first time that the columnist has undermined and defamed Sikh personalities and organizations. Calling him a habitual liar, he said Nayyar has leveled wild allegations against Sant Bhindrawale by calling him Congress agent. SYP district president Gurnam Singh said Nayyar should know that “stooges” don’t embraced death for the cause.