“Losing Sight In Kashmir: The impact of pellet-firing shotguns”, A Report By Amnesty International India

New Delhi: Pellet-firing shotguns, which have been responsible for blinding, killing and traumatizing hundreds of people in Kashmir, must be immediately banned, Amnesty International India reiterated today in a new briefing, “Losing Sight in Kashmir: The Impact of Pellet-Firing Shotguns”. 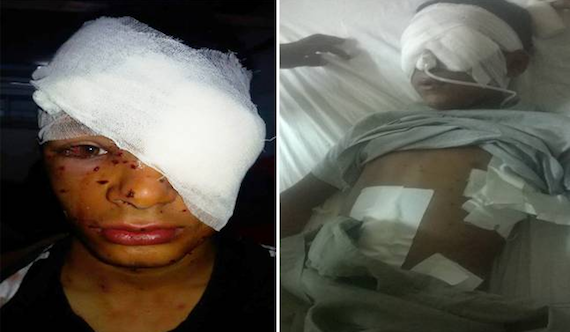 The briefing presents the cases of 88 people whose eyesight was damaged by metal pellets fired from pump-action shotguns used by the Jammu and Kashmir Police (JKP) and Central Reserve Police Force (CRPF) between 2014 and 2017.

“In his Independence Day speech, Prime Minister Narendra Modi said that change in Kashmir will not come from guns or abuses – na goli, na gali. If the government truly means this, they must end the use of pellet-firing shotguns, which have caused immense suffering in Kashmir,” said Aakar Patel, Executive Director at Amnesty International India.

“Authorities claim the pellet shotgun is not lethal, but the injuries and deaths caused by this cruel weapon bear testimony to how dangerous, inaccurate and indiscriminate it is. There is no proper way to use pellet-firing shotguns. It is irresponsible of authorities to continue the use of these shotguns despite being aware of the damage they do.”

People injured by pellet-firing shotguns have faced serious physical and mental health issues, including symptoms of psychological trauma. School and university students who were hit in the eyes said that they continue to have learning difficulties. Several victims who were the primary breadwinners for their families fear they will not be able to work any longer. Many have not regained their eyesight despite repeated surgeries.

“In some cases, those injured by pellet-firing shotguns still have the metal pellets lodged in their skulls, near their eyes. Doctors have been afraid to remove the pellets, fearing that it will affect eyesight, but they are not sure what the long-term effects will be,” said Zahoor Wani, Senior Campaigner at Amnesty International India.

“Unfortunately the central government has turned down requests for information about pellet shotguns. It is unclear if the shotguns have been properly tested, or their effects and risks assessed, or whether there is even any protocol about how they must be used. The government of Jammu and Kashmir has done little to support those injured and disabled by this weapon.”

Amnesty International India also obtained information through Right to Information applications which suggests that the use of the inherently inaccurate pellet-firing shotguns by security forces has injured other security force personnel. At least 16 personnel from the Jammu and Kashmir Armed Police were treated for pellet injuries in Kupwara in 2016. Amnesty International India wrote to the JKP and CRPF for further information, but no responses were received.

“Authorities have a duty to maintain public order, but using pellet shotguns is not the solution,” said Aakar Patel. “Security forces must address stone-throwing or other violence by protestors by means that allow for better targeting or more control over the harm caused.”

Amnesty International India calls on the central government and government of Jammu and Kashmir to immediately stop the use of pellet-firing shotguns and ensure that the use of all other weapons is in line with international human rights standards on use of force. Authorities should also provide full reparation in line with international standards to those injured by pellet-firing shotguns and to the families of those killed.

The Government of Jammu and Kashmir should also initiate prompt, independent and impartial civilian investigations into all incidents where the use of pellet-firing shotguns led to deaths or injuries to establish whether arbitrary or excessive force was used, and where sufficient evidence is found, prosecute those suspected of responsibility in civilian courts.

Security forces have used metal pellet-firing shotguns against protesters in the Kashmir valley since at least 2010. The shotguns fire a large number of small pellets spreading over a wide range. There is no way to control the trajectory or direction of the pellets, whose effects are therefore indiscriminate. By their very nature, the weapons have a high risk of causing serious and permanent injuries to the persons targeted as well as to others. These risks are virtually impossible to control.

Pellet shotguns and the manner in which they have been used in Kashmir violate international standards on the use of force, which state that law enforcement officials may use force “only when strictly necessary and to the extent required for the performance of their duty”. The UN Basic Principles on the Use of Force and Firearms states that force should only be used when unavoidable, and law enforcement officials should “exercise restraint” in using force and “minimize damage and injury”.