Nanded/ Maharashtra, India (August 22, 2014): It is learnt that the representation of Shiromani Gurdwara Parbandhak Committee (SGPC) in the Takht Hazur Sahib (Nanded) Board at will be clipped as the Maharashtra government has granted approval to the report of J. S. Bhatia committee. 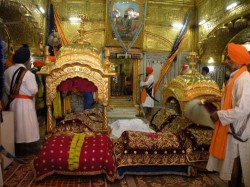 Accordingly, there will now be 21 members in the Board instead of 17 earlier. Also, instead of the earlier four nominated SGPC members, now there will be only one SGPC nominated member, an official said after the Cabinet meeting.

Of the 21 members, 18 will be elected of which nine will be from Nanded district. Two will be nominated by Maharashtra government and one by SGPC.

The committee had been constituted by the state to recommend amendments in the Takht Sri Hazur Abchalnagar Sahib Board Nanded Act, 1956.

The Cabinet decision last night paves way for formation of a new Gurudwara Board to manage the affairs of the Takht at Nanded.

The Nanded Collector will be on the Board. All members, except the Collector, will be Sikhs.

The decision of Maharashta Cabinet arrives as a setback for SGPC, which was already under fear of loosing control of Historical Sikh Gurdwaras in the state of Haryana as the Haryana government has formed separate Haryana Sikh Gurdwara Management Committee.

The issues related to Gurdwara management are getting out of domain of any central or spirited Sikh body as various Gurdwara Acts have granted larger decision making powers to different “state organs” of India, including state Governments.

According to senior journalists Gurdwara Acts have invited the interference of Indian state to Gurdwara Management and the Sikh religion. “Such type of state interference tends to ‘secularize’ religion”, he adds.