BLANTYRE, Malawi (OFMI): In a formal response to growing outrage among citizens of Malawi about a proposed statue of Mohandas Gandhi which is being erected in Blantyre, the second-largest city in the southern central African country, the Government of Malawi suggested the statue is required by India in order for the country to continue benefitting from “credit and concessionary loans for various development projects.”

The statue is a precondition for India’s sponsorship of construction of a Mahatma Gandhi International Convention Centre in in Blantyre. In total, India plans to install identical centres in nine African countries. However, many locals say that the investment project comes at the cost of honoring a racist.

Over 3,000 people have signed a petition to oppose the statue. Citing multiple statements made by Gandhi throughout the Indian icon’s 21-year stint as a lawyer in South Africa, the petition claims he is known for “showing nothing but contempt for the black African race.” Denouncing Gandhi’s “bigotry in relation to black Africans,” the petition concludes, “We cannot ignore his racist remarks against black Africans.” 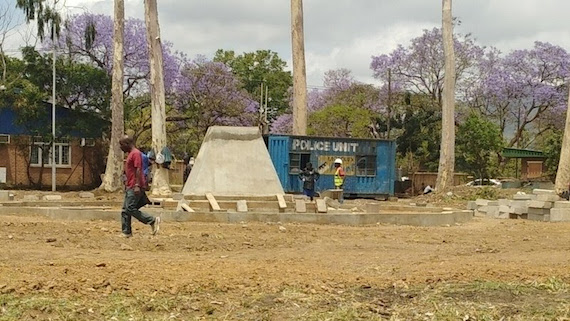 The Malawian Government’s October 11 response claims, “Mahatma Gandhi is a role model of a human rights campaigner for both Africa and India.” However, professors at the University of Ghana reacted differently. In 2016, they launched their own petition which alleged that Gandhi is known in South Africa for “his role in the establishment of the infamous caste-like apartheid system.”

Identifying themselves as the #GandhiMustFallGhana Coalition, the professors successfully protested a Gandhi statue on their campus and obtained a government promise to remove the same. Offering formal comments in support of the Malawi campaign, the coalition stated on October 10, “This is truly part of a larger struggle encompassing the entire global African world. We will not be silenced in the restoration of truth, dignity, and African self-respect.”

Meanwhile, some see the issue as one of broader principles. “We understand that Gandhi was not just a man who spread hatred against black people, but also a sexual predator who forced his own teenage female relatives to share his bed in a twisted test of his efforts at celibacy,” says Roxanne Carter, a spokesperson for Organization for Minorities of India (OFMI). “As a woman, it’s deeply offensive that a statue of this man should be put up at any place in the world.”

Pieter Friedrich, an analyst of South Asian affairs, remarks, “India is competing with China to be the next superpower to buy the support of African nations.” Friedrich says installing a statue of Gandhi in Africa is an insult to its black population. “It’s degrading to black people to tell them they can only get loans, lines of credit, development, jobs, or positive diplomatic relations with India if they agree to honor a man who openly promoted white supremacy. If India were sincerely interested in the advancement of Malawi’s economy, it would remove this condition.”

Responding to protests in a Radio France Internationale article, Indian journalist Tirthankar Chanda agreed that Gandhi “was a racist” and yet claimed that he later had “a mental and psychological evolution.” Mpambira Aubrey Kambewa, however, one of several Malawian activists who oppose the statue, pointed out, “There are several publications by him which have never been retracted in which he says some very racially motivated things against black people.”

Friedrich adds, “Nobody disagrees that Gandhi was racist, but some people insist he evolved. Can a man evolve beyond racism without first retracting his statements and apologizing for his actions? Gandhi never changed. People think that Dr. Martin Luther King was inspired by Gandhi, but the truth is that Dr. King was robbed of the true narrative because he had no access to the full writings of Gandhi.” He continues, “Africans today are suggesting that they have been double-victimized by Gandhi. First, Gandhi spread racial hatred and promoted segregation, then he was propagated as a hero for Africans. Are Malawians really going to stand still and let India insult their dignity by perpetuating the Gandhi myth instead of exposing and rejecting his racism?”

“African nations have many other options besides support from India,” concludes Arvin Valmuci, an OFMI spokesperson. “We hope they look beyond the agenda of India to strategize ways to secure assistance from nations that don’t require honoring monsters like Gandhi in exchange for food, aid, or development. This issue is not going away. The common people of India are today suffering under the Hindutva regime of the Bharatiya Janata Party. Hindutva promotes Aryanism. It seeks to exterminate non-Hindus from India. Just like Gandhi, the BJP has nothing but contempt for Afrians, as well as Sikhs, Muslims, Dalits, Buddhists, and Christians. We support #GandhiMustFall as a decisive step towards unveiling the human rights abuses of India.”