New Delhi, India (August 11, 2014): Former Prime Minister Manmohan Singh’s daughter Daman Singh said that a mob had tired to burn their house in Ashok Vihar in Delhi during November 1984 violence in Delhi. She made this disclosure on the eve of the release of her book on her parents. She said that their house was saved by his sister’s husband, who was a Hindu and convinced the mobs that it was not a Sikh family’s house. Her brother in law had convinced the mob that it was a Hindu family’s house. 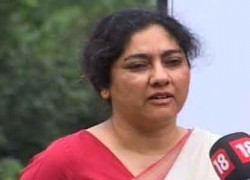 Daman Singh also talks about the incident in her book Strictly Personal: Manmohan and Gursharan. She said her father, then the RBI Governor, was away in Mumbai at that time. Her just married elder sister and her brother-in-law were staying at the Ashok Vihar house.

“When the ‘riots’ started, Ashok Vihar was one of the affected areas…a mob came to our gate and wanted to enter it and burn it down. My brother-in-law went out. It so happens that my brother-in-law is not a Sikh. So he tried to convince them not to do this and then he said the house did not belong to a Sikh family. It was his house and he was a Hindu…this satisfied the mob and they went away,” she said.

“The sad thing was that we knew some of the people in the mob… They were not our friends, but we knew who they were.”

Asked about the so-called “apology” the former PM tendered for the November 1984 in Rajya Sabha in 2005, she said he did not see it as a personal experience, but as how the Sikhs and India had been through.

It is notable that Sikhs were subjected to genocidal violence in India in November 1984 after the assassination of the then Indian PM Indira Gandhi on October 31 in 1984. Thousands of Sikhs were massacred by burning them alive. The violence against the Sikhs was planned and executed by high ups in Indian administration and the Congress party.