NEW YORK (PRESS RELEASE by Sikhs For Justice): More than 50,000 men Sikh men and women — many of them carrying Khalistan banners — paraded in rain-swept New York City on Saturday to reaffirm their demand for a sovereign Sikh state.

Wearing orange colored turbans, they raised vociferous slogans calling for Sikh unity and an end to the “Indian occupation of Punjab” at the 30th Sikh day parade which coincides with the birth of the Khalsa.

They followed a float depicting the 1984 Indian Army attack on the Golden Temple and demanded an independent Sikh state and separation of Punjab from India. The participants also vowed to uphold and project the Sikh identity and to endorse the call for referendum in the state of Punjab. 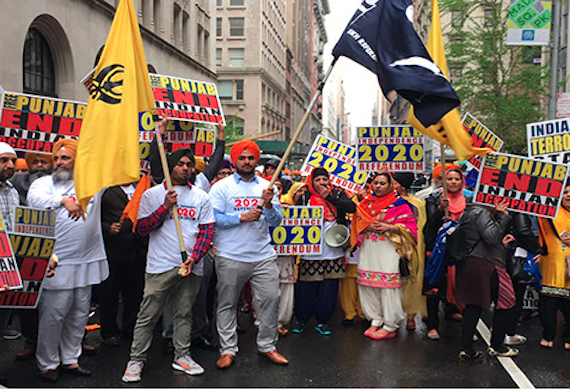 New York City Mayor Bill de Blasio, who joined the parade, congratulated the “vibrant” Sikhs on the birth of Khalsa and commended the achievements and the contributions of the community to the American life. “Today the turbans all over the city show that New York belongs to and is home to the Sikh community,” he said amidst loud applause.
The highly visible supporters of ‘Sikhs For Justice’ (SfJ), a human rights group, were wearing the ‘Referendum 2020’ T-shirts carried the placards ‘Free Punjab’ and ‘Justice is Independence’.

Coordinator of Sikh Day Parade Gurdev Singh Kang, said “After the destruction of the [Akal Takht Sahib] in 1984 and genocidal violence against the Sikh community, the only choice left to the Sikhs is to have their own independent country.”

Kuldip Singh Dhillon, president of Gurdwara Sikh Cultural Society, said “hundreds of thousands of Sikhs have laid down their lives for the freedom of Punjab and we will not let their sacrifices go in vain.”

“India must allow an independence referendum in the State of Punjab on the lines of Scottish referendum,” Attorney Gurpatwant Singh Pannun, legal advisor to SFJ, said.

Spelling out the line of action, Pannun says that the SFJ would hold an unofficial referendum in 2020 and would follow the matter after taking into account the response. If required, the SFJ would seek the United Nation’s intervention to help the community conduct a referendum for a separate Sikh state, attorney Pannun added.