Mexico Hit By Magnitude 8.2 Earthquake, Called Its Strongest In a Century

Mexico City: Mexico has been hit by a powerful earthquake in 100 years  late Thursday night, forcing millions of intimidated and rattled Mexico city residents to be out in the open on the road. It reported that atleast five people have lost there lives and further being closest to the epicenter of the earthquake the southern part of the country has been completely leveled. 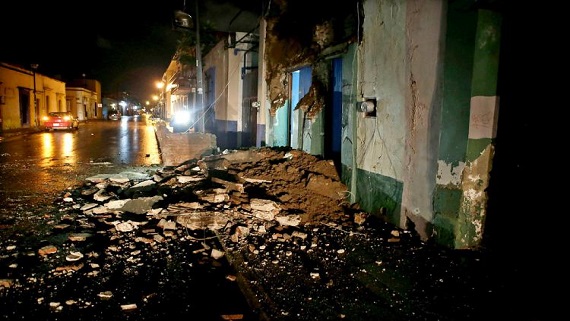 Damages to a building following the strong earthquake magnitude 8.2 on the open Richter scale that violently shook Mexico in Oaxaca, Mexico, early 08 September 2017.

The magnitude-8.2 quake, which was felt as far as Mexico City and Guatemala City, was registered off Mexico’s southern coast just as heavy rains from Hurricane Katia lashed the east. The epicenter was in the Pacific Ocean, some 600 miles (1,000 kilometers) southeast of the capital and 74 miles (120 kilometers) from the Pacific coast, reads a quote from a report published on the official website of CNN.

About 50 million people across the country experienced the tremors, the sheer force of the earthquake rocked the city’s landmark ‘Angle of Independence’ monument. Windows broke building across the megacity collapsed.

The United States Geological Survey (USGS) Pager system, which predicts economic and human loss after earthquakes, issued a red alert. “High casualties and extensive damage are probable and the disaster is likely widespread. Past red alerts have required a national or international response,” ii said, notes The Independent.

Consequently, Mexico’s Army, Marines and Federal Police were being mobilized to respond, President Peña Nieto said. 1.85 million homes lost electricity, but 74% of them have had service returned, Peña Nieto said.Some people are lacking water service, and it may take 36-48 hours to get it back up and running, he adds.