Connecticut, USA: Various minority groups have announced to protest against RSS chief Mohan Bhagwat and Uttar Pradesh CM Yogi Adityanath during World Hindu Congress scheduled to be held at Chicago from September 7 to 9. 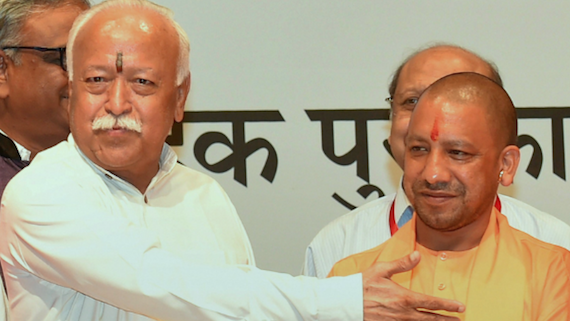 The protesting groups are alleging that both the Hindutva leaders hold ‘fascist ideology’ and spread hate against minorities.

Sikh human rights activist from Connecticut state of USA, Swaranjit Singh Khalsa said in a radio interview that various Sikh, Christian and Muslim groups have joined hand to prevent presence of Mohan Bhagwat and Yogi Adityanath in Chicago but if the US government failed to prevent their presence then they would hold peaceful protest demonstration.

“We have enough proofs that RSS and its affiliates such as Vishav Hindu Parishad, Bajrang Dal etc. are pursuing fascist agenda. We have written letter to government authorities to cancel visas of Mohan Bhagwat and Yogi Adityanth”, said Swaranjit Singh.