ATLANTA, GA: On May 5, 2019 several activists gathered to protest Mohandas Gandhi as the Indian Consulate in Atlanta, Georgia organized a 150th birth anniversary celebration of the iconic figure at his statue in the Dr. Martin Luther King, Jr. Center.

“Gandhi hated blacks,” read one sign that protestors laid at the base of the statue. Flanked by the American and Indian flags, the statue was freshly garlanded by consular officials. “No place for Gandhi in USA,” read another sign displayed by the small but determined group of protestors. 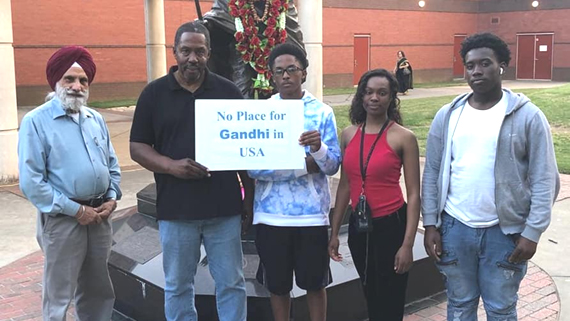 “An official from the consulate came up and threatened to put me on a travel blacklist so I cannot return to India,” says Nanak Singh, who helped organize the protest. “I told him Mayawati will be the next Prime Minister, so he should pack his bags and get ready to be shipped out. We reject intimidation by tyrants when we tell the truth about Nobel Peace Prize rejects like Gandhi.”

Other signs alleged that the statue at the King Center is a religious icon. They further claimed that it represents hatred for women. Referring to Gandhi’s infamous Brahmacharya vow, during which he conducted sexual experiments with his teenage grandnieces (including one who was under his guardianship), other signs labeled him a “child molester.”

Gandhi, who lived in South Africa from 1893 to 1914, has long faced charges of racism against black Africans. Such charges sparked controversy over a statue placed at the University of Ghana in 2016. After a sustained campaign by faculty and students, the statue was torn down in December 2018. In Malawi, after the Indian government proposed to install a statue in exchange for financial assistance, local activists succeeded in obtaining a court injunction to prevent it.

“Gandhi must fall everywhere in the world,” remarks Arvin Valmuc, a spokesperson for Organization for Minorities of India (OFMI). “There is not only no place for Gandhi in the USA, but no place for him in India, and especially not in Africa. The greatest insult, however, is to install a statue of this vehement racist — who never apologized for his promotion of racial segregation in pre-apartheid South Africa — at the Dr. King Center.”

Earlier this year, OFMI produced a video discussing the difference between the dreams of Dr. King and Gandhi. Filmed on location at the King Center, the video notes, “Gandhi’s dream was to make sure that little black boys and black girls never played together with little Indian boys and Indian girls.”