Chandigarh: As per the media reports activist affiliated with different pro-hindutva groups on Friday (July 14) in Agra, Uttar Pardesh burned the copies of New York Times (NYT), a US based print media. It is stated that the activists got infuriated after reading the facts in a research article on political journey of UP Chief Minister Yogi Adityanath published in NYT dated 12th July on to which they accused of maligning the image of the CM. 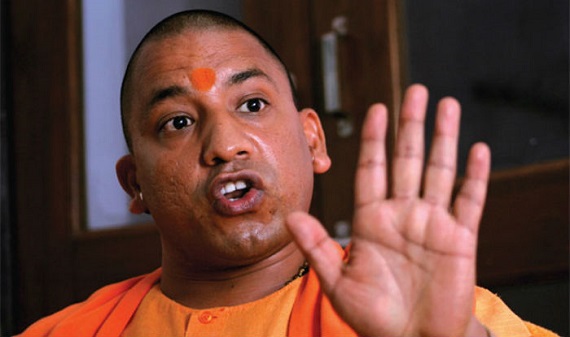 They alleged that the facts and quotes given in the article are part of an anti Modi propaganda and that it was an attempt of the New York Times to malign Yogi Adityanath and his growing stature in Indian politics. This turned them hysterical about their pro-hindutva leader and they went on burning the copies of the aforesaid news.

Yogi Adityanath who’s elevation from being a head priest at Gorakhnath Math in Uttar Pradesh to the Chief Ministership of the state sent shockwaves across the political circles of both India and UP. He started his political journey as an active member of the student wing of the Rashtriya Swayamsevak Sangh (RSS), a fountain head of the pro-hindutva ideology in the sub-continent.

It was on this one of the baleful political journey with supposed insidious agenda in mind that the journalists Ellen Barry and Suhasani Raj  wrote this article on in New York Times. According to the scribes Yogi Adityanath after winning the Parliamentary elections formed a violent vigilante group called the Hindu Yuva Vahini, or Hindu Youth Brigade. The volunteers, now organized to the village level and said by leaders to number 250,000, show up in force where Muslims are rumored to be bothering Hindus. 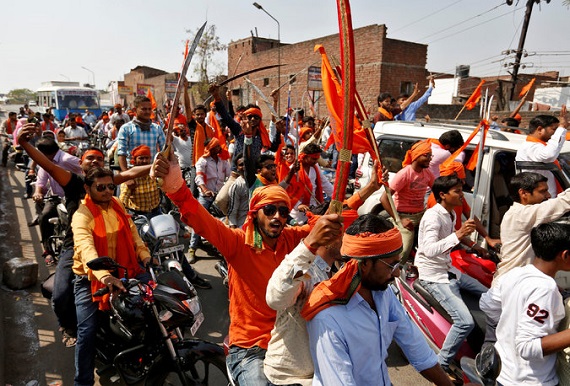 While in an interview with the writers Vijay Yadav, 21, a volunteer lounging at Gorakhnath Temple in Gorakhpur on a recent day, said he had recently mobilized 60 or 70 young men to beat a Muslim accused of cow slaughter. They stopped, he said, only because the police intervened.

During the first five years after the vigilante group was formed, 22 religious clashes broke out in the districts surrounding Gorakhpur, a city in Uttar Pradesh, in many cases with Adityanath’s encouragement, said Manoj Singh a UP based journalist In 2007, Adityanath was arrested as he led a procession toward neighborhoods seething with religious tension.

He recalled that the  the officer who arrested Adityanath stopped first to touch his feet as a gesture of reverence.

Adityanath was released after 11 days, but the arrest seemed to jolt him. He became more cautious, no longer directly leading followers into religious confrontations, Mr. Manoj Singh adds.

Another journalist Vishal Pratap Singh with Lucknow based electronic media stated that Adityanath was a “totally changed man on camera,” careful to avoid comments offensive to Muslims. Still, Mr. Singh said, his ratings are sky-high, and the reason is obvious.

“Like Modi, he speaks for the Hindus,” he said. “Within his heart, he is a totally anti-Muslim person. That is the reason he is so likable.”

It is claimed by Neerja Chowdhury, an analyst, that Yogi Adityanath is currently trying to establish himself as an effective administrator.

“Remember, he is 20 years younger than Modi, and he is a known doer, so if he manages to deliver on some fronts, he would then become a possible candidate” in 2024,  she further said.

“India is moving Hindutva ,”  “Whether India moves further right, and Modi begins to be looked upon as a moderate, I think that only time will tell.” she adds.

While Yogi Adityanath might be busy with re branding him self and shedding away with his older more aggressive image to qualify as a mainstream politician on the political center stage of India, his followers and supporters and increasingly becoming disillusioned and annoyed with him.

Furthermore, in an reported interaction with the media persones Sonu Yadav, 24, of Gorakhpur who has served as an active member with his Hindu Yuva Vahini group said he had been disappointed by Mr. Modi’s tenure.

“We voted for Modi because Yogi endorsed him, but we are disillusioned,” he said. He went on to refer to the 2002 killings in the state Mr. Modi led, which his critics say he allowed to rage for several days, leading to more than 1,000 deaths.”

“All of us in our colony felt that Modi would allow us to kill Muslims,” he said. “Muslims were scared. But nothing happened. When Yogi became chief minister, they were scared again.”

For now, as Adityanath establishes a more mainstream reputation, Mr. Yadav and his friends have been told by their group’s leadership to cease all violent activities and instead perform community service. Vijay Yadav, Sonu’s friend, openly chafed at the new orders.

“This thing is going on in Yogi’s head that my shirt should not get a stain,” he said. “I couldn’t care less for his stained shirt. I can’t do good work and avoid getting a stain.”

He noted, by way of example, the recent beating death of a 62-year-old Muslim man whom vigilantes abducted and interrogated about a neighbor’s alleged love affair with a Hindu girl, to which his stone cold reaction was “Along with the wheat,” he said, “small insects will get crushed.”