Norwich, Connecticut, USA: Vaisakhi for Sikhs which is celebrated all over the world on April 14th according to Mool Nanakshai Calender has been recognised by City of Norwich,Connecticut USA as “National Sikh Day”.

Vaisakhi also know as Khalsa Sirjana Diwas ,a day on which Sikh identity was made and Articles of faith (5 kakkkars) came to existence. 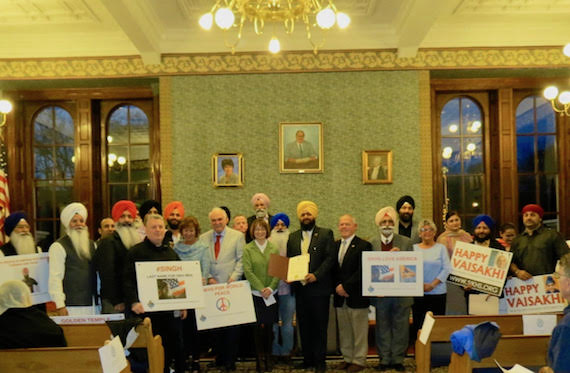 Swaranjit Singh Khalsa said “This recognition (Proclamation) will not only open door ways for other Cities to declare but it is also a foundation stone to declare April 14th as National Sikh Day at National Level”. 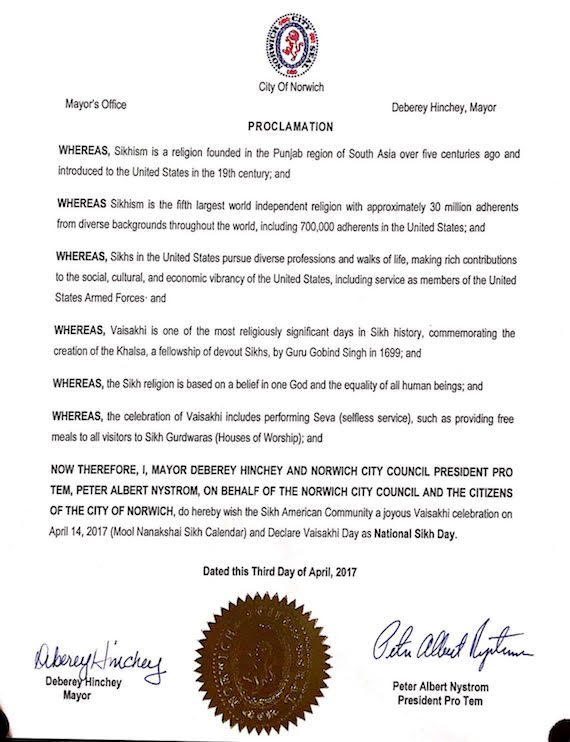 Sikh Community of American thanked both Deb Hinchey and Peter Nystrom for accepting their request and declaring this Holy day as National Sikh Day.

On this occasion Sikh Leaders from New York, New Jersey and Connecticut were present in large numbers.

Sikh Sewak Society International is Also running Vaisakhi Campaign this year in Norwich in which educational Billboards and Bus shelter signs will be installed in City to create awareness among people about Sikhism.

Whereas Sikhism is a religion founded in the Punjab region of South Asia over five centuries ago and introduced to the United States in the 19th century;

Whereas Sikhism is the fifth largest world independent religion with ap- proximately 30 million adherents from diverse back- grounds throughout the world, including 700,000 adherents in the United States;

Whereas Vaisakhi is one of the most religiously significant days in Sikh history, commemorating the creation of the Khalsa, a fellowship of devout Sikhs, by Guru Gobind Singh in 1699;

Whereas the Sikh religion is based on a belief in one God and the equality of all human beings; and

Whereas the celebration of Vaisakhi includes performing Seva (selfless service), such as providing free meals to all visitors to Sikh Gurdwaras (Houses of Worship);