“This motion is an important step in creating more good jobs in Ontario,” said NDP Deputy Leader Jagmeet Singh, who authored the motion. “If you’re a temporary worker, you should be getting the same pay and benefits as the person beside you doing the same job.” 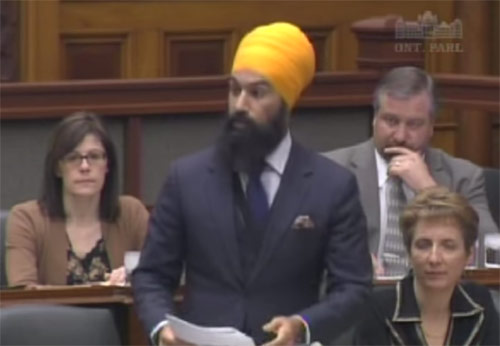 “Ontarians placed by temp agencies are getting paid much less to do the exact same job as the person sitting right next to them. That’s not fair and it’s not right,” said Singh, who is the MPP for Bramalea-Gore-Malton. “Everybody deserves respect on the job and that means being paid fairly.”

Over 700,000 Ontarians are temporary workers, leaving many families that depend on temp agencies vulnerable to predatory practices, which include clawing back salaries by up to 50 per cent. Roughly 22 per cent of jobs in the province are characterized as precarious, and racialized workers experience disproportionality higher rates of precarious and temporary employment.

“For far too long, the Wynne government has allowed hard-working people to be unfairly preyed upon, denying them the dignity of a fair wage for the work they do,” said Singh. “It’s time for Premier Wynne to take action for Ontario workers and families who deserve respect and dignity at work.”