Melbourne (Tejashdeep Singh Ajnauda): In remembrance of 1984 Sikh genocide by the Indian State, the Supreme Sikh  Council of Australia is going to organise an annual march in Australia’s Melbourne city on 6 November. 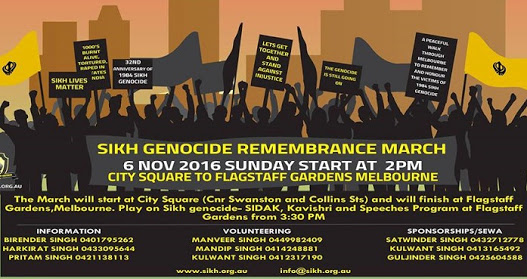 This year Bibi Paramjeet Kaur Khalra, wife of martyred human rights activist Jaswant Singh Khalra will be the key speaker during the rally to be held after the rememberance march. The pain of state repression will be shared through stage as under the direction of well know play writer Alex  Singh ‘Sidak’ will be performed and another play on issue of Punjab waters will be performed during this event.

This annual remembrance march is supported by local and state Gurudwara Parbhandak committees and the Sikh sangat.