Lahore: The house arrest of Jamat-ud-Dawa (JuD) chief  Hafiz Saeed by Pakistani authorities on Monday might be seen by many as an initiative to ease Indo-Pak tension, but the local media in Lahore reported that the supporters of the Hafiz Saeed launched protests across major cities against the government’s decision which they believe was taken under pressure from the US and India.

Notably Pakistan authorities on Monday declared Hafiz Saeed’s residence as a sub-jail by the authorities in Punjab province. The provincial authorities have also started to remove the banners of Jamaat-ud-Dawa (JuD) from the roads of Lahore.

Pakistani flags have been hoisted at the JuD offices in Lahore, instead of party flags, on the directives of the provincial home department. 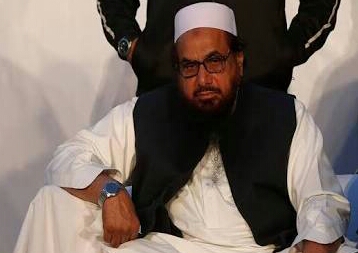 As he was placed under house arrest, his supporters launched protests in cities like Islamabad, Lahore and Karachi.

“The detention of Hafiz Saeed could help ease tensions between nuclear-armed forces Pakistan and India, although New Delhi has not yet responded,” the English vernacular stated in its editorial.

It further added that the 2008 Mumbai attack brought Pakistan and India to the brink of war after gunmen killed 166 people in a rampage that included attacks on two luxury hotels, a Jewish center and a train station.

But Hafiz Saeed has consistently been denying any role in the attack and has distanced himself from LeT, while leading his charity JuD.

His supporters are of the firm believe that the Nawaz Sharif government has succumbed to the wishes of the US, which has earlier offered a USD 10 million reward for information leading to JuD Chief’s arrest.

“This government has buckled under the pressure,” JuD spokesperson Nadeem Awan said who also accused India of pressurizing the government.

A senior Pakistani defense ministry official was quoted by the media saying that Islamabad had not been contacted by the new administration of US President Donald Trump but had been feeling US pressure on the issue.

“Trump is taking hard decisions against Muslim countries, there is open talk of actions against Pakistan also. So yes, this was a consideration,” the official further added to his statement.

The media further reported that some government officials have recently stated that a broader diplomatic campaign – pushed by India – to isolate Pakistan has taken a toll, even involving pressure from longtime ally China.

Last week, the Punjab’s Ministry of Interior had included names of Hafeez Saeed and four others — Abdullah Ubaid, Zafar Iqbal, Abdur Rehman Abid and Qazi Kashif Niaz — in the Watch List as per UNSC 1267 Sanctions and ordered their preventive detention.

Punjab government’s action comes amidst pressure on Pakistan from the Trump administration that it must take action against JuD and Saeed to avoid sanctions.