Chandigarh: Acting swiftly on the complaint filed on 16th December by the local Sikhs of Hangu district of Khyber-Pakhtun agency, against a local government official who had earlier told the Sikhs to relinquish their respective faith and convert to Islam, has been suspended by the Pakistani authorities. 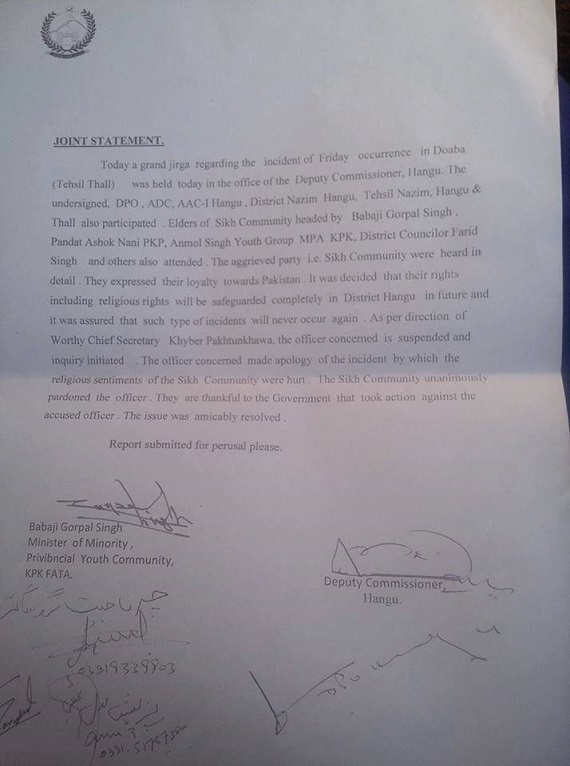 A delegation of the Sikhs represented by Baba ji Gurpal Singh, Pandat Ashok Nani PKP, District Councilor Farid Singh on 17th December submitted a Joint Statement to the Deputy Commissioner, Hangu. After which on the directions of Chief Secretary Khyber Pakhtunkhawa, the officer concerned was suspended with immediate effects and an inquiry was marked for the same.

Furthermore, the controversial officer offered his apologies to the Sikhs for the incident, to which the Sikhs unanimously pardoned him. Moreover, they also expressed their gratitude towards the government of Pakistan for timely addressing and resolving the issue.

Meanwhile, it is interesting to note that why the Punjab Chief Minister Amarinder Singh on Tuesday asked Minister for External Affairs Sushma Swaraj to take up the matter of forced conversion which has already been resolved, with her Pakistani counterparts.