Patiala: The Punjab police today withdrew case against Bibi Sukhpreet Kaur, daughter in law of Baba Balwinder Singh, and 3 others. They were arrested after a clash took place between Nihang Singhs and Patiala cops on Sunday at Sabzi Mandi Patiala. 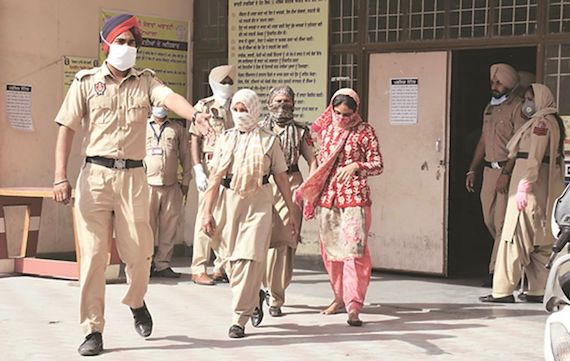 Bibi Sukhpreet Kaur being brought out of court [FILE PHOTO]

Patiala Senior Superintendent of Police (SSP) Mandeep Singh Sidhu said that the police moved an application in a local court today which was accepted by the court. After which four were released from custody.

As said earlier the police has withdrawn case against 4 persons, who details are as follows:

Notably, Nanna is a deaf and dumb person.

The police have reportedly said that it has taken “sympathetic view” on the basis of “humanitarian grounds” and “less role” of these persons had emerged during the investigation.

POLICE HAD ARRESTED THEM UNDER “UAPA”:

Notably, these persons were arrested under the second case related to Sunday’s incident which related to arrest of 11 persons from Village Balbera of Patiala district.

The Punjab police has been facing criticism for making blanket arrests, and especially for arresting Bibi Sukhpreet Kaur.

Notably, the main was FIR No. 71 (PS Sadar Patiala) which was related to clash between police and Nihang Singhs. That case was registered against 4 persons my name. The police had added two/three persons as unidentified in this FIR.

But the police had arrested 11 persons from village Balbera. Therefore, questions were being raised that why police arrested so many people when only four persons were involved in the incident.

IT WAS EVIDENT FROM FIR THAT SUKHPREET KAUR WAS NOT INVOLVED IN SABZI MANDI INCIDENT:

In a written statement issued (in Gurmukhi/Punjab) on Wednesday (copy available with SSN), Baba Harnam Singh said: “Guilty should get proper punishment but in the given case arresting a woman and pressing Nihang Singhs in courts without Dastars is against human values and Sikh principles, which could lead to tense and untoward situation“.