Amritsar: There are reports that several persons who brandished swords at the Darbar Sahib complex on Bandi Chhor Diwas (Diwali) were allegedly hired by the SGPC and SAD (Badal), notes a news reported by The Tribune.

According to The Tribune [t]he matter was raised by an executive member of the SGPC at its meeting on Friday. Punjabi Tribune notes that SPGC executive member Karnail Singh Pajoli raised a question during the SGPC executive committee’s meeting that who had called such persons to the Darbar Sahib on Bandi Chhor day. 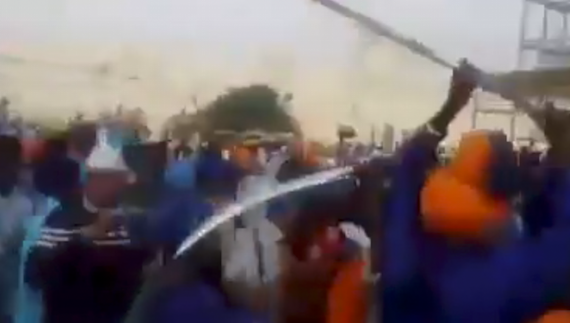 A screenshot from a video of November 11, 2015 which shows people brandishing swords in front of Akal Takhat Sahib

On the other hand, some Sikh leaders who assembled there to protest Akal Takht Jathedar’s address claimed there was a group comprising clean shaven youths which was not part of their protest.

The alleged accused were nabbed by some pilgrims. They were reportedly drunk and loitering in the Darbar Sahib complex. They were handed over to the police, but according to the media reports they were let away by the police without taking any action.