New Delhi: Atrocities on tribals in Chhattisgarh continue to be perpetrated by the police and administration, according to activists and lawyers.

They said that adivasis in Bastar, Dantewada and Sukma districts of Chhattisgarh had become victims of fake shootouts, torture and illegal detentions.

The activists, who addressed the media here late on Tuesday (August 18), said that although the people had got together to protest against the police, there was an increase in violence from the state.

“Terror is being spread by the state to snatch away lands from the tribals. For them Naxal issue is an excuse to snatch away the land. But we will not give up the fight,” said Soni Sori, an adivasi school teacher turned political leader. 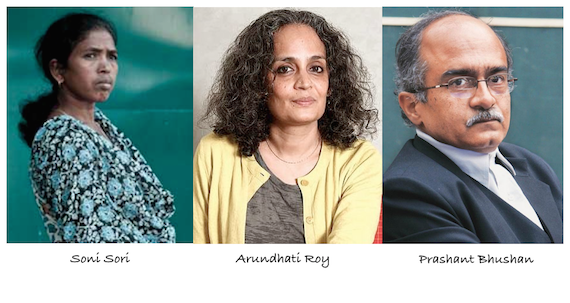 Sori is a member of Aam Aadmi Party (AAP), on whose ticket she contested the 2014 general elections from Bastar, but lost to Dinesh Kashyap of BJP.

She was arrested by the Delhi Police in 2011 on charges of acting as a conduit for Maoists. During her imprisonment, she alleged that she was tortured and sexually assaulted by the Chhattisgarh police. By April 2013, the courts had acquitted her in almost all cases due to lack of evidence.

Sori alleged that in the past one year, about 400 fake surrenders had taken place in Bastar. She said that recently she and Lingaram Kodopi, her activist nephew, had been issued threats by Inspector General (IG) of Bastar, S.R.P. Kalluri.

The people in the area have been urged to ex-communicate them because the two had been exposing the fake shootouts taking place in the area, she said.

“Since the time Kalluri was appointed, all these things have been happening. People are united and are fighting the police terror. There are a number of rallies which we had to take against the police terror. Police were threatening to arrest us. We said we were ready to go to jail,” Sori said.

According to Kodopi, who was also arrested on charges of acting as a conduit for Maoist, about 10 fake shootouts had taken place in Bastar in six months.

Advocate Vrinda Grover said that tribals were arrested under several serious charges, but were later acquitted for lack of evidence.

“Looking at the charges, they are not even granted bail. The conviction rate is between one and three percent. But, the incarceration period is very long. They are kept in prisons on trumped up charges for abnormally long periods,” she said.

Author and political activist Arundhati Roy said the “whole of Chhattisgarh police is being turned into army. Jungle Warfare College in Kanker is headed by an ex-armyman, who is taking lead in this. In the heart of India, there is an international border, where people who cross the border are killed.”

“I was told by an SP that the way to win over the tribals is to hand over television sets to each and every family. They are planning to make Bastar an industrial area. They want the tribals to be slaves in those industries. There is whole lot of economic interests behind all this happening in Bastar. Anyone who is against this genocidal project is termed a Maoist by the government,” she said.

According to Advocate Prashant Bhushan, operation Green Hunt is happening in a modified form in Chhattisgarh. The operation was an attempt by the government to flush out or kill naxalites, carried out in five states.

He said the Supreme Court had dismantled in 2011 the Salwa Judum — a group created illegally by the authorities in the state to fight naxalites. “The same people who were part of Salwa Judum are now appointed as SPOs (special police officers). The guidelines laid by the Supreme Court on encounters were not even followed by the judiciary there,” Bhushan alleged.