Rampura Phul: The recitation of alleged Hindu prayer, a counterfeit version of the Sikh Ardas, at the inauguration of poll office of Punjab rural development minister Sikandar Maluka on Monday at Rampura Phul town of Bathinda has created a controversy. Baba Hardeep Singh of Mehraj village in Rampura Phul has filed a police complaint (copy available with the Sikh Siyasat News) and has demanded registration of a police case against Sikandar Maluka for hurting the religious sentiments of Sikhs.

The nearly 5-minute-long video clip of the ‘ardas’ has gone viral on the social media and has been attracting strong condemnation remarks from the Sikh organizations and Sikh sangat.

The ‘ardas’ was recited after the ‘bhog’ of Ramayana path held on Monday morning at main bazaar of Rampura in the presence of Sikandar Maluka, two time MLA (1997 & 2012) from Rampura. He also lost twice in 2002 and again in 2007. He is in contest from the same seat for the fifth time. 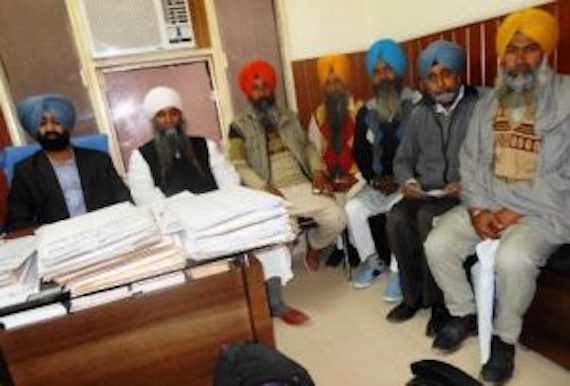 Baba Hardeep Singh Mehraj and others

“In the video, the prayer, though recited as per the tenets of Hindu religion, it is similar to the way ‘ardas’ in Sikhism. After the ‘ardas’ if Sikhs raise a slogan of ‘Bole So Nihal’, here is was Jai Shri Ram but in the same fashion as Sikhs do,” said complainant Baba Hardeep Singh.

He said, “It seems that Sikandar Maluka allowed it just to please the Hindu voters. This is unacceptable.” He added, “I have filed a complaint at the Rampura city police station.”

Bathinda SSP Swapan Sharma reportedly confirmed that a complaint has been filed for action against the minister for hurting religious sentiments. “Police will seek legal opinion and will send the complaint to district attorney for his advice”, a report in Times of India (ToI) quotes SSP Swapan Sharma.