Chandigarh/ Bathinda: Days before the November 10 gathering at Talwandi Sabo, the Punjab police yesterday launched a massive crackdown on activists and leaders of Shiromani Akali Dal Amritsar and United Akali Dal besides other groups and individuals who were mobilising support for the event.

The crackdown, as per Punjab DGP Suresh Arora (as quoted in some media reports), was launched after the “Bathinda administration” refused permission for the event.

Meanwhile, Bhai Baljit Singh Daduwal maintained that nearly 1,500 activists were arrested. Gopal Singh Sidhu, SAD (Amritsar) general secretary and spokesperson, took claimed that 1,561 persons had been detained or arrested since midnight. “Almost all office-bearers of our party, apart from other supporting groups, have been put in jail,” he said. 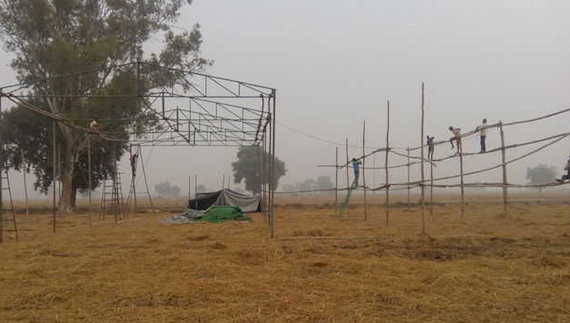 Tents were removed from the venue of November 10, 2016 Sikh gathering under directions of the Punjab government

The government removed tents and other structures at the 63-acre venue for the congregation. The ‘Sarbat Khalsa’ is scheduled at a private land near Talwandi Sabo.

Several prominent Sikh leaders, including Shiromani Akali Dal (Amritsar) chief Simranjit Singh Mann and United Akali Dal (UAD) leader Gurdip Singh Bathinda, managed to give police the slip; they have gone into hiding. According to media reports these leaders have shifted their base to Haryana. They have placed their stake at the petition moved in the Punjab and Haryana High Court seeking permissions to hold the event.