Bathinda, Punjab: Security outside the Gurdwara Jandalisar Sahib near Kot Shamir village has been intensified following the grant of bail to Baba Baljit Singh Daduwal. Baba Daduwal was granted bail by the Punjab and Haryana High Court on Tuesday (Oct. 07). His release is expected today.

As per reports, more than 100 policemen have been deployed outside the Gurdwara and on the road leading to the Gurdwara. The police have placed the barricades and road has been blocked for traffic. No one is allowed to go beyond that point. 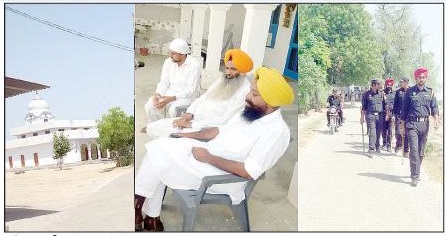 Amrik Singh who was campaigning for Badal Dal candidate at Kaliawali in Haryana has already returned to Kotshamir after learning about bail granted to Baba Daduwal. A police official said security had been tightened as a precautionary measure to maintain law and order.

Amrik Singh said a five-member committee of village residents had been constituted to manage the affairs of the gurdwara. He said Daduwal would be allowed to pay obeisance at the gurdwara just like any other devotee but would not be allowed to stay there.

Ajaib Singh, a member of the committee also echoed Amrik’s sentiments and said Baba Baljit Singh Daduwal would not be allowed to stay at the gurdwara. Daduwal’s belongings are still in the Gurdwara and his room was locked after his arrest.

SP (headquarters) Jasvir Singh tried to downplay the developments saying that deployment of the police force was a routine affair and no extraordinary deployment had been made.

It is notable that Baba Daduwal had played a key role in the formation of the HSGMC and its taking over of the Guhla Cheeka Gurdwara in Haryana.