New Delhi, India: The Aam Aadmi Party (AAP) convener Arvinder Kejriwal has said that “[p]re-poll communal violence is becoming a pattern”. He did not name any party but said that “vested political interests” were behind the incidents of “pre-poll” violence. He said so while answering a question posed by Rajdeep Sardesi to the Aam Aadmi Party in relation to incidents of recent clashes between Hindu and Muslim communities in Delhi’s Tirlokpuri area.

“Incidentally, Trilokpuri MLA is from AAP. Would AAP like to clarify situation? And what is being done to secure peace?” Rajdeep Sardesai ‏[@sardesairajdeep] asked in a tweet. 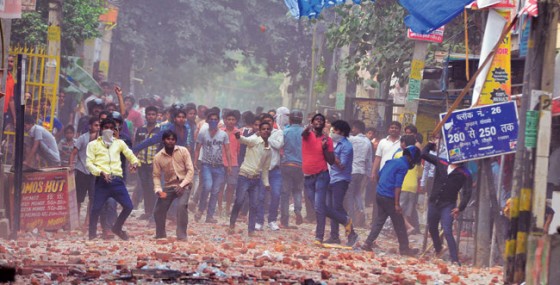 It is notable that Tirlokpuri area of Delhi witnessed violent clashes between Hindu and Muslim communities. Certain sections of media have pointed figure towards a former BJP MLA for his role in triggering the violence.

Arvind Kejriwal’s comment about pre-poll violence attains significance in wake of recent experience which shows that since the formation of BJP government in center the incidents of communal violence have increased, especially in poll bound areas.

According to a report more than 600 incidents of communal violence were recorded in Uttar Pradesh with in first three months of formation of Modi government in the Center. Out of these 60% were incidents had taken place the then 12 poll bound constituencies in Uttar Pradesh.

Since the resignation of AAP government in Delhi that state has no government. The BJP is accused for ruling away from holding fresh elections in Delhi.