Ferozepur: Giving a call for boycott of January 26 celebrations due to the negative stance of the Indian state towards Sikh aspirations and rights including right to self determination, Dal Khalsa strongly reiterates its resolve to invoke the international community, the UN forums and associate with other nationalities across the Indian subcontinent to seek and ensure enforceability of the UN recognised right.

The organization announced its plans to hold peoples’ marches in the three cities of Ludhiana, Hoshiarpur and Zira on January 26 to give impetus to their campaign for the Right to self determination.

At a press conference Dal Khalsa leader Kanwar Pal Singh there was no other peaceful route to resolve the existential crisis of Punjab and Kashmir, whose people aspire for independence.

The attempt to take over the management of Gurdwara Hazoor Sahib by the BJP government of Maharashtra is the latest live example of state meddling in the religious affairs of the Sikhs. It is for these reasons that we seek relief from the domination of India. 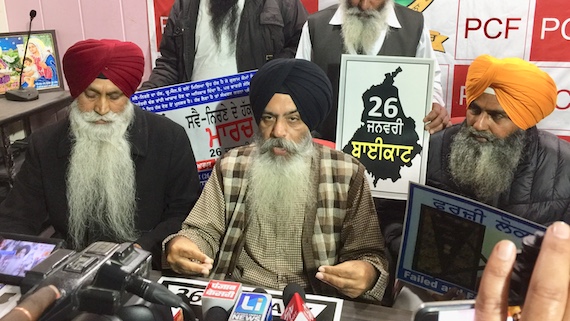 To a question he said Plebiscite and Referendum have same connotations and both flow out of the Right to self determination.

He said India has gone back from honouring its commitment made to the Sikh community at the time of the partition of the sub-continent.

He appealed to the people of Punjab to stay away from republic day celebrations. There are no reasons to celebrate as “New Delhi is not only denying but crushing our rights and aspirations.” Sadly, the UN is mute.

In Modi’s India, Cows have rights but humans don’t. Namaz is banned in parks but RSS shakhas are allowed in parks. Space for dissent has shrunk and freedom of expression is allowed selectively. Like Badals, Amrinder too is captive of police establishment. Guilty cops of Behbal Kalan firing including former DGP S S Saini are enjoying impunity.

Party leader Paramjit Singh Tanda said that Indian state claims to be a big democratic country in the world and celebrates 26 January as its republic day but its democratic claims are being badly exposed as it continuous to rob Punjab of its river waters by subverting the spirit of Constitution, denies democratic rights and distinct identity to Sikhs, imposes Hindu laws on Sikhs and suppresses legitimate struggle with militarily and police batons, bullets.

Surjit Singh khalastani said it’s regrettable that the present constitution of India is a constitution of convenience as the provisions of the document have been used, misused and not used to suit the expedient needs of the rulers from time to time”.