Moga: As India celebrated its Independence Day, Dal Khalsa and other pro-freedom Sikh groups staged a protest in Moga, observing the day as black day against beadbi incidents and it’s fallout, political subjugation of Punjab, human rights violations and denial of the right to self-determination to the people of Punjab.

Hundreds of activists of Dal Khalsa and representatives of other religio-political Sikh bodies held a two-hour demonstration at the main bus stand roundabout, followed by a march to a local Gurdwara.

Carrying black flags, banners and placards, the young demonstrators chanted slogans like ‘Sikhs want Azaadi from India’ and denounced the Indian state for oppressing Sikhs and others. 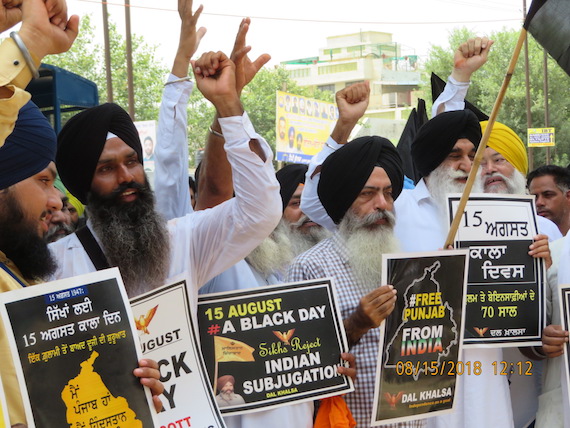 The demonstrators held banners which stated that the then Sikh leaders’ decision to join India was a huge blunder. Making a special note of the trial of two hijackers after 37 years, a placard was critical of the Indian justice system.

Addressing the gathering, party head Bhai Harpal Singh Cheema said, “It has been 71 long years since India got freedom, but nothing has changed for Sikhs and other religious and ethnic minorities.

Justifying their protest on India’s national day, he clarified that in principle they were not against rejoicing Independence Day of any country. However, it is irony of fate that a country like India has mis(used) every democratic institution to deny the glow of freedom to Sikhs and other minorities. All promises made by Indian leadership to Sikhs during partition have been conveniently ignored. Instead, the (Indian) state through its security forces has unleashed terror and repression on Sikhs in the last four decades.

Bhai Harpal Singh Cheema said the Justice Ranjit Singh Commission report is leaked and everything is in black and white, yet the Amarinder Singh government, like it’s predecessor is only paying lip service without any action. This is a recent classic example of what treatment Sikhs get in this country while allowing guilty top cops to go scot-free.

Party spokesperson Kanwar Pal Singh said Sikhs and Kashmiris were not alone in this crisis of identity in India. All minorities and Dalits, are suffering.

He added that it was disgusting to note that the international community has been responding only in situations of armed struggle but maintaining a deafening silence where people struggle peacefully.

“International forums unabashedly ignore the democratic and peaceful struggle of the Sikhs and Kashmiris and turn a blind eye to the misery, pain and violation of their human rights,” he said.