Chandigarh: A students body SATH organised a demonstration at Punjab University Students Centre demanding reunion of Chandigarh with the state of Punjab. The students body also objected to Central government’s recent notification that has curbed Punjab’s right to recruit employees under Chandigarh cadre. 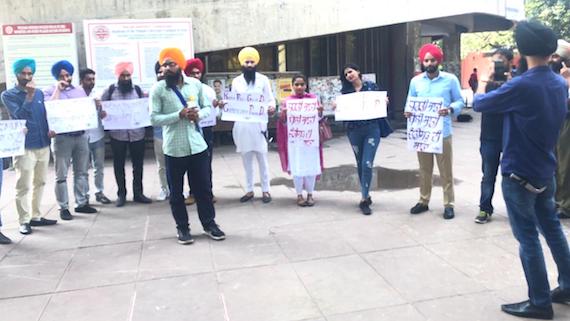 Paramvir Singh, a representative of SATH raised slogan ” Khideya Full Gulab Da Chandigarh Punjab Da” and said it is a historical fact that Chandigarh was built on the land of Punjabi farmers. The authorities crushed agricultural society in order to construct the “City Beautiful” and this area originally belongs to Punjabi speaking population.

Student Mehtab Singh said eastern Punjab was without capital after partition and Punjabi villages were demolished for purpose of constructing new capital. But Indian government played cunningly with Punjabis by giving  share of Chandigarh to Haryana. Like many other states Punjab was restructured on linguistic basis but centre unlawfully denied Punjab to give full rights over Chandigarh. Centre did so voluntarily in order to ignite a permanent conflict between two neighbouring states.

Students with natives of land on which Chandigarh was built at PU Students Center (Oct. 11, 2018)

Student Juzar Singh provide audience with facts. He gave the name of different villages which were destroyed in order to construct various sectors of Chandigarh.

Sukhwinder Singh concluded the protest by thanksgiving statement and he strongly patted his fellows and toed the same line by saying that Punjabis will not accolade Indian government’s move to rob Chandigarh from Punjab.