PUDR Condemns Use of Draconian PSA in Jammu And Kashmir

New Delhi: People’s Union for Democratic Rights has strongly condemned the continuous use of the draconian J&K Public Safety Act, PSA, against the leaders and people of Kashmir.

In the last six months, since the lock down, as many as eight mainstream political leaders have been booked under the PSA. Besides three former chief ministers, Farooq Abdullah, Omar Abdullah and Mehbooba Mufti, National Conference Leaders Ali Mohd. Sagar and Hilal Lone, and PDP leaders Sartaj Madni and Naeem Akhtar have also been booked under PSA.

The latest to be booked is Shah Faesal, the bureaucrat turned politician who has been in preventive custody since August 14, 2019.

Like Omar Abdullah and Mehbooba Mufti, Faesal was booked under the PSA just as his six months preventive detention under S 107 of CRPC was ending. 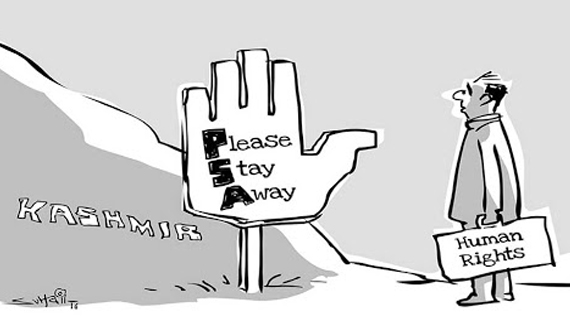 The J&K PSA is a preventive detention law like the National Security Act which is applicable in the rest of the country. Where the NSA permits preventive detention without charge for up to 1 year, the PSA prolongs even this draconian provision by providing for detention up to 2 years, violating principles of natural justice.

FREQUENT USE OF PSA & NSA IN KASHMIR:

The J&K PSA and the NSA have routinely been deployed by governments against critics. The current widespread use in Kashmir exhibits a similar context. According to the JKCCS and APDP, of the 662 people booked in 2019, 412 arrests happened after the lock down. Clearly, the decision to use the PSA was political, i.e. to prevent opposition to enactments by the government, and these have little to do with actions or expected actions of those detained. Such use of a preventive detention law is doubly reprehensible.

The grounds being conjured to permit these arrests make a laughingstock of the competent government. Unbelievable and misleading claims have been cited to make the dossier against those detained to look impressive. The PSA permits the inclusion of even irrelevant grounds, which cannot form a basis for striking down of the detention order. Such practices need to be stopped.

GOVT. SHOULD ALLOW PEOPLE TO EXPRESS THEIR OPINION: PUDR

In its statement PUDR said that it believed that the interests of justice and concerns of people’s safety are best served through an environment of free and open expression and exchange of ideas and views. Such an atmosphere needs to be enabled by the government without any further delay.