New Delhi: AAP convener and Delhi CM Arvind Kejriwal started distributing compensation cheques of Rs 5 lakh each to the families of the victims of 1984 Sikh genocide. He handed over the cheques to 1,332 affected families yesterday.

The Delhi Cabinet took a decision on August 12 this year to not wait for the Ministry of Home Affairs (MHA) to sanction money for the same. A sum of Rs 130 crore has been set aside for compensation.

A government official said, “We hope the MHA reimburse us the amount, but so far we have not received any assurance.” 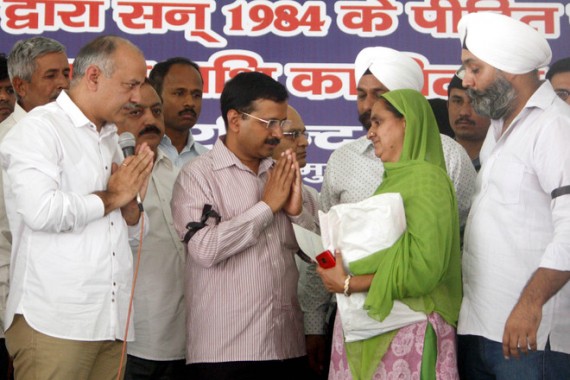 Arvind Kejriwal and the Delhi Deputy CM Manish Sisodia paid homage to the 1984 genocide victims at Tilak Vihar in West Delhi. The Chief Minister has said he is thinking of setting up a special investigation team to ensure speedy justice for the victims.

Kejriwal said that if the culprits of November 1984 Sikh carnage had received stiffer punishment, the Gujrat massacre of 2002 might not have taken place.

Had the guilty been punished after the November 1984, Gujarat and Dadri incidents would not have happened and “communal intolerance” would not have spread.

“Over the past 31 years, almost every party formed government in Delhi as well as at the Centre and kept on saying that Sikhs should get justice. But who else will ensure justice, if the government doesn’t?” Kejriwal said. Every political party expressed concern over these incidents, but no culprit has been punished so far, he said.

Hinting at recent communal incidents, Delhi CM the society was faced with a dangerous situation when intolerance and hatred was being engineered and spread with perpetrators knowing they had the backing of those in power.

Accused of November 1984 escaped trials or punishment for past 30 years with active political patronage. In May 2015 a retired Bombay High Court judge criticized Indian judiciary for its failure to punish the culprits of November 1984 Sikh genocide.