Punjab is in the throes of a retributive backlash: Human Rights activists [Conference Report]

Chandigarh: Punjab is in the throes of a retributive backlash by its political masters against dissidents, opposition party members and farmers who hold diametrically opposite views to the ruling party combine. Quite suddenly, though not unexpectedly, there is a wave of intolerance in Punjab. Hundreds of religious and political leaders, volunteers, farmers and activists have been detained and imprisoned under various detention laws.

In Kashmir, human rights violations continue routinely. In the name of security, the Kashmiri leadership continues to be illegally detained. To wave off opprobrium from any quarter, all house arrests and detentions are illegal -with no trace or record. 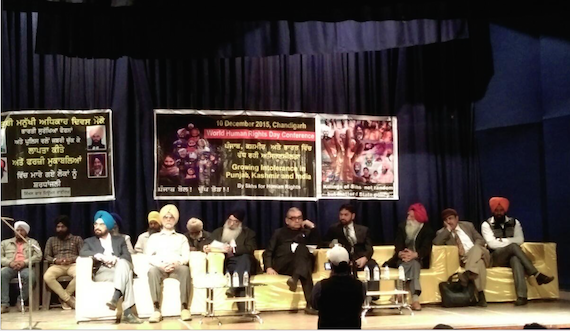 A views of stage during the conference

In Tamil Nadu, the Jayalalitha government has detained all those seeking prohibition in the state. A case of sedition has been slapped against folk singer Sivadas for singing songs against the liquor policy of the state.

A common feature of violations in these parts of the country is the flagrant misuse of laws, ranging from the Armed Forces Special Powers Act, the Public Safety Act, the Unlawful Activities Prevention Act, regular temporary detention procedures and sedition provisions of IPC.

The startling disclosures by Gurmeet Singh Pinki (as reported in the latest issue of Outlook magazine and so far without any rejoinder by the state or central government) -a police vigilante turned police turned accused criminal may have rattled the Punjab police bureaucracy, but they have only affirmed and confirmed what human rights bodies and political groups have been shouting from rooftops ad nauseam since the last two decades. The brazen brutality and impunity with which state sponsored killings of innocent people were carried out, the gross abuse of laws by the Indian state which managed such extrajudicial killings, the utter carelessness with which the Indian judiciary overlooked it and the irresponsible and unethical manner in which the Indian media reported it, should shock the conscience of right-thinking Indian civil libertarians, thinkers and politicians.

These shocking facts should bestir the international community to come out of its shell and expose the façade of Indian democracy and reorient its campaign for search of truth into the events of the last two decades of the last century in strife-torn rebellious Punjab.