New Delhi: Hindi translation of investigative journalist Rana Ayyub’s book Gujarat Files – An Anatomy of Coverup was released in Delhi on Saturday (Sept. 16). Book has already been translated into various other languages, including Urdu and Punjabi. 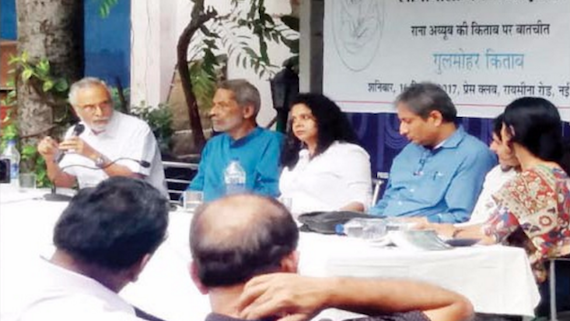 The Hindi translation of the book was released jointly by Ravish Kumar, Rana Ayyub, Advocate Varinder Garovar, Seema Chishti, Pankaj Bishat and Ajay Singh during an event held at Press club in Delhi on Saturday evening.

Speaking on the occasion journalist Ravish Kumar said that the book was important for the readers of the Hindi language to understand the massacre of 2002. Talking about 1984 violence against the Sikhs, he said that some people are still protesting with commitment seeking justice. He asked that why we people forget the crimes and massacres committed by politicians?

READ THIS NEWS IN DETIAL in GURMUKHI/PUNJABI:

Rana Ayyub said that had the justice been done in 1984 massacres related cases, the 2002 massacres would not have happened.

She said that the culprits of Gujarat 2002 massacres are ruling this country today and perhaps we are conscious dead people.