Chandigarh: A latest report by US Commission on International Religious Freedom noted that in 2018 religious freedom conditions in India continued a downward trend. The 2019 report released few days back notes that religious freedom has come under attack in recent years with the growth of exclusionary extremist narratives—including, at times, the government’s allowance and encouragement of mob violence against religious minorities—that have facilitated an egregious and ongoing campaign of violence, intimidation, and harassment against non-Hindu and lower-caste Hindu minorities.

“Over the last decade, conditions for religious minorities in India have deteriorated. A multifaceted campaign by Hindu nationalist groups like Rashtriya Swayamsevak Sang (RSS), Sangh Parivar, and Vishva Hindu Parishad (VHP) to alienate non-Hindus or lower-caste Hindus is a significant contributor to the rise of religious violence and persecution. Those targeted by this campaign—including Muslims, Christians, Sikhs, Buddhists, Jains, and lower-caste Hindus—face challenges ranging from acts of violence or intimidation, to the loss of political power, increasing feelings of disenfranchisement, and limits on access to education, housing, and employment. While there is a system of affirmative action for education, housing, and employment that is constitutionally mandated to assist historically disenfranchised groups, especially lower-caste Hindus, some have called its efficacy and fairness of implementation into question”, reads the report. 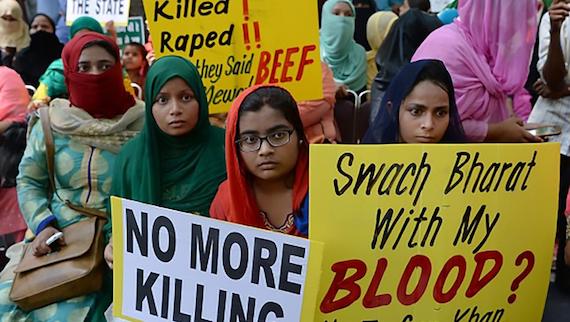 “Both public and private actors have engaged in this campaign. In 2018, approximately one-third of state governments increasingly enforced anti-conversion and/or anti-cow slaughter laws discriminatorily against non-Hindus and Dalits alike. Further, cow protection mobs engaged in violence predominantly targeting Muslims and Dalits, some of whom have been legally involved in the dairy, leather, or beef trades for generations. Mob violence was also carried out against Christians under accusations of forced or induced religious conversion. In cases involving mobs killing an individual based on false accusations of cow slaughter or forced conversion, police investigations and prosecutions often were not adequately pursued”, the report noted.

Rules on the registration of foreign-funded nongovernmental organizations (NGOs) were discriminatorily implemented against religious minority groups. Religious freedom conditions varied dramatically from state to state, with some states continuing to be relatively open and free for religious minorities, while others—if taken on their own—had “systematic, ongoing, egregious” violations of religious freedom, key findings of the report notes.

“In 2018, the Supreme Court of India highlighted the deteriorating conditions for religious freedom in some states, concluding that certain state governments were not doing enough to stop violence against religious minorities and, in some extreme instances, impunity was being granted to criminals engaged in communal violence”, notes the report.

Pointing to Narendra Modi’s silence the US report says: “Prime Minister Narendra Modi seldom made statements decrying mob violence, and certain members of his political party have affiliations with Hindu extremist groups and used inflammatory language about religious minorities publicly. Victims of large- scale attacks in recent years have not been granted justice, and reports of new crimes committed against religious minorities were not adequately accounted for or prosecuted. India’s substantial population both complicates and limits the ability of national and state institutions to address these issues”.

Indian has expressed displeasure over the report.