The SAD had threatened to snap ties with the BJP over the interference of Rashtriya Sikh Sangat (an affiliate of Rashtriya Swayamsevak Sangh) in the Sikh religious affairs. 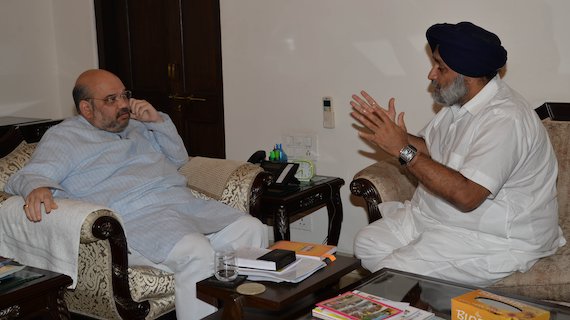 SAD (Badal) had made the amendment made in Section 11 of the Takht Sri Hazur Abchalnagar Sahib Board Nanded Act, 1956, which allowed the Maharashtra government to increase its representation in the management of the gurudwara, as flashpoint.

After Sukhbir Badal and Amit Shah’s meeting it is said that the BJP has assured SAD (B) that the amendment made in the Act would be withdrawn.

As per media reports an assurance was also made that the Rashtriya Sikh Sangat would not interfere in the affairs of the Sikhs.

Both parties are learnt to have agreed not to step on each other’s political turfs, and Badal was assured that the Badals would be consulted on all issues concerning Sikhs.

It is notable that the SAD (Badal) and BJP have not enjoyed a very comfortable working relationship since 2014. While the two parties were in power in the state till March 2017, the BJP-led government at Union level did not give any new project or succumb to any demand made by the Badal-BJP government of Parkash Singh Badal. Even during the run-up to the state assembly polls, there were murmurs in the Badal Dal regarding the RSS not helping them, and rather helping the Congress party.

However, as the elections draw near, the two allies seem to be working on their mutually beneficial electoral marriage. Snapping of ties over the sensitive issue of the RSS infringing on Sikh religious institutions would also impact the BJP in states like Delhi, Haryana and Rajasthan, with sizeable Sikh voters, notes a report in The Tribune (TT).