Anandpur Sahib: In a press conference organised here, general secretary of Delhi Sikh Gurdwara Management Committee and minister of state in Punjab, Manjinder Singh Sirsa said that he has sent a legal notice through his advocate S.S. Ahluwalia to the Rohit Dhawan, director of an upcoming movie namely Dishoom. He said similar notice is also sent to movie’s heroine Jacqueline Fernandez. He said that duo have been informed that he would initiate criminal legal proceedings against both the accused.

Issuing a copy of the notice to the media, Sirsa claimed that in the movie, Jacqueline Fernandez has been shown dancing to tunes of a particular song, with a Kirpan tied to a belt and dangling between her legs. He said that Kirpan is one of the essential Kakar worn by a practising Sikh. 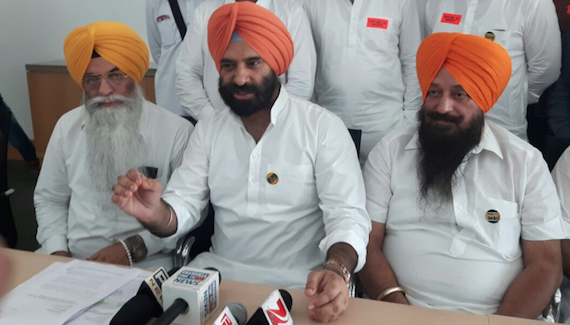 He said that the song video in question has intentionally violated the sacredness and respect of Kirpan and the movie’s director as well as actress both are responsible.

The statement read that through the legal notice, Manjinder Sirsa asked director Rohit Dhawan to immediately remove all the trailers/videos of the aforesaid song uploaded at youtube.com or other websites; either delete the song from the movie or re-shoot its video without the Kirpan worn by the actress and to make public apology along with Jacqueline Fernandez to the Sikh community for the deliberate insult done to a respectable Sikh religious symbol.

He warned that if the these remedial steps are not taken, DSGMC would initiate criminal proceedings against the accused persons u/s 295A & 120B for hurting the religious sentiments of the Sikh community and will also file a petition in the court for banning the release of the movie.