Bathinda: Two days after ruckus at a Punjab minister’s stone-laying ceremony at Khokhar village near Rampura, a similar incident was reported at Kothaguru village.

Four villagers were injured after they were allegedly beaten up by ruling party (SAD – Badal) workers for protesting at meeting by Punjab minister Sikandar Maluka.

The meeting was held at the village to mobilise support for the November 23 Sadbhawna rally to be held at Goniana in Bathinda.

As per information the Badal Dal workers organised a gathering which was addressed by Rural Development and Panchayat Minister Sikander Maluka. To facilitate Maluka’s speech Badal Dal workers beat up the protesters who were holding black flags as a token of their protest against the ruling party. 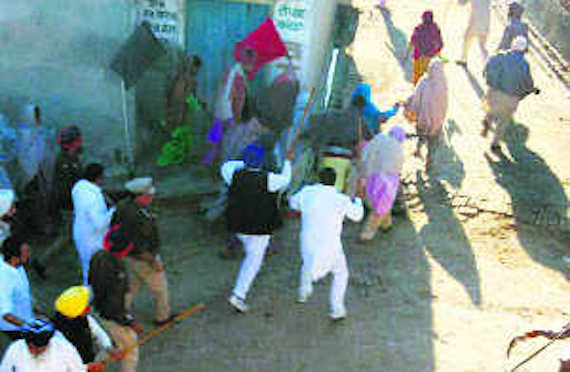 “A large number of policemen accompanied by SAD workers started chasing the villagers away and beat them up with sticks,” alleged BKU (Ekta-Ugraha) leader Basant Singh.

He alleged two gunshots were fired by SAD workers in the air to create panic among farmers. “The minister kept delivering his speech despite firing and chaos. No policeman dared to stop Akali workers who thrashed poor villagers, including women and elderly,” Basant alleged.

A Punjabi vernacular (Rozana Pehredar) quotes Sikandar Maluka saying that the Punjab government and the organization of the SAD Badal would be of no use if such protests were allowed to prevail. The newspaper notes that even women were not spared by SAD workers.

Birbal Singh, SHO, Dyalpura, refuted the allegations of thrashing the villagers. He said since some people tried to disrupt the minister’s programme, they rounded up nine persons. “We have not registered a case against them. They are taken into custody as a preventive measure,” he said.